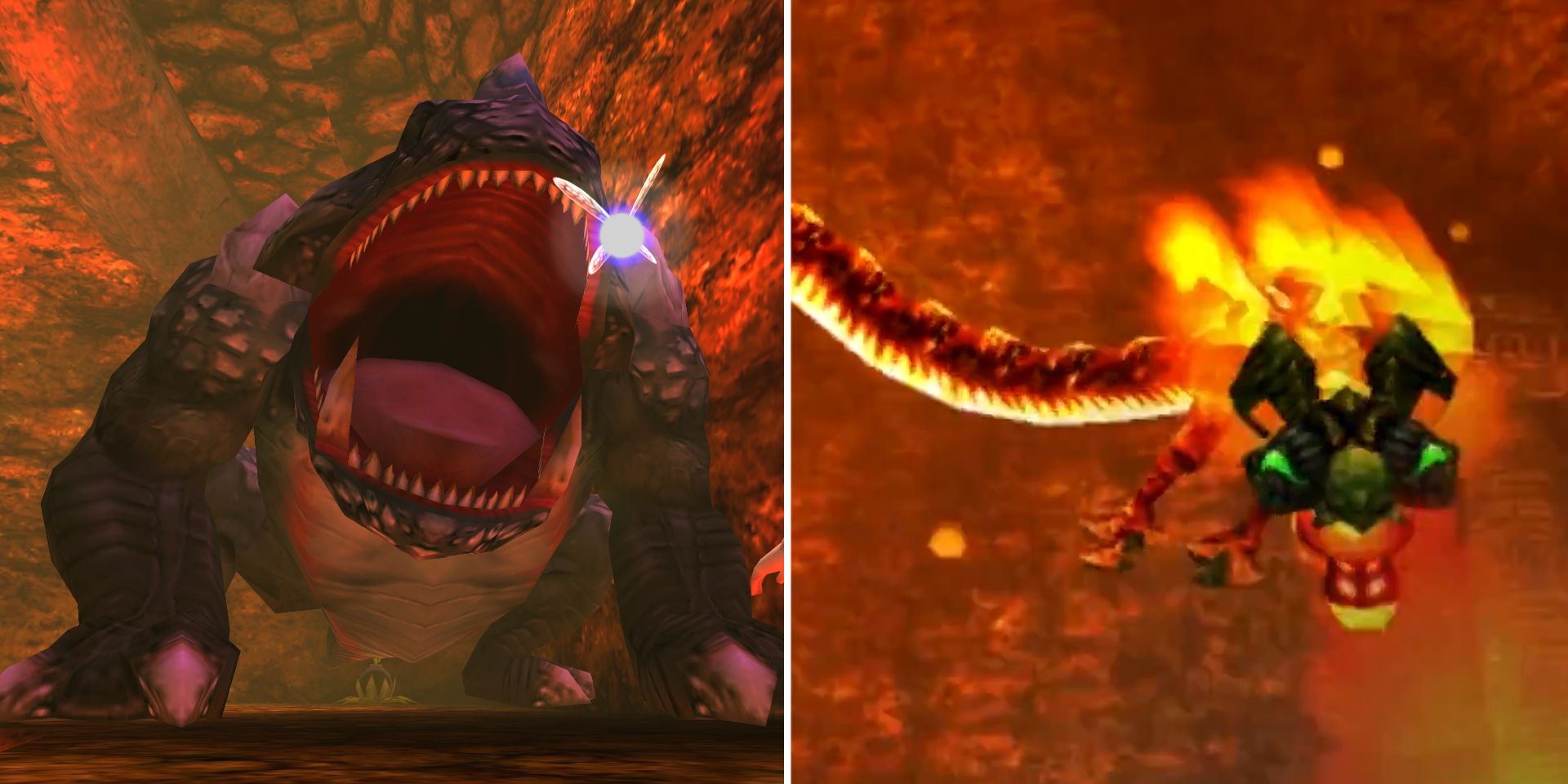 Zelda: Every Ocarina Of Time Boss, Ranked By Difficulty

Few things in the game are more satisfying than finally getting the boss key at the end of a dungeon in one of the many The Legend of Zelda Games. And few things in the game get your adrenaline pumping more than finally coming face to face with a Zelda chief. These bosses are designed to test everything the player has learned so far, including using the item the player has earned during the boss’s respective dungeon.

RELATED: Breath Of The Wild: Every Boss, Ranked By Difficulty

Not a lot Zelda games have bosses that have left a greater impression on players than those of The Legend of Zelda: Ocarina of Time. Ocarina of time was an incredibly new experience for Zelda fans new and old due to the series transitioning to 3D. The bosses were bigger and more terrifying than ever. There are exactly ten main bosses in Ocarina of time going through various difficulties. Which boss is the toughest of them all?

ten King Dodongo has a very basic strategy to defeat him

The first two bosses in the game are both extremely easy to beat, but King Dodongo takes the cake for being the easiest. This massive beast can be found at the end of Dodongo Cavern and is the second boss Link will face.

King Dodongo’s strategy is simple: when he opens his mouth to breathe fire, throw a bomb down his throat. The bomb will explode, leaving him vulnerable to a few hits. It will recover, curl up into a ball and roll. Just crouch and Link’s Hylian Shield will protect him. Repeat the process two more times for an easy win.

What makes Queen Gohma harder to beat than King Dodongo? There is a little less margin for error. Queen Gohma is the very first boss encountered by Link and can be found in the Great Deku Tree. Link will have to fire his slingshot directly into the giant arachnid’s eye to stun it.

The problem with Queen Gohma is that she will climb across the room and spawn a Gohma larva that can overwhelm Link. A well-timed sling could prevent this. However, this boss is encountered at a time when the player is still acclimating to the game.

8 Morpha is the easiest part of the dreaded Water Temple

Few things can strike a chord with Zelda fans quite like “Water Dungeon.” Players can thank the infamous Water Temple from Ocarina of Time. At the end of this frustratingly convoluted dungeon is Morpha, an orb that can control water and is the sixth boss.

Morpha is fortunately the easiest part of the Water Temple. Morpha can summon water tentacles that can grab and hurt Link. The key to defeating Morpha is to simply stand in a corner of the room, where Morpha cannot hit Link, and use the hook shot on the Morpha to pull the orb out of the water. This leaves him vulnerable to attack for a short time as he tries to get back into the water. That’s all we can say about it.

7 Volvagia turns a cool looking dragon into a carnival game

How about a game of Whac-A-Mole? Because that’s essentially what the Volvagia boss fight at the end of Fire Temple is all about. Volvagia looks way more intimidating than it is. Link will be on a platform that has holes from which Volvagia will spawn. When it does, hit it with the Megaton Hammer. Volvagia will fly around the map, allowing Link to hit it multiple times with an arrow. Repeat the process. The second time it flies, boulders will fall from the ceiling, which can be avoided by hanging onto the edge of the platform.

6 Barinade is nothing more than a slight stomach ache

Barinade is the third and final child boss Link faces and can be found at the end of Inside Jabu-Jabu’s Belly. The first thing the player wants to do is cut the tentacles attached to the ceiling with the boomerang to detach the Jabu-Jabu boss.

The boss will summon several jellyfish-like Biri enemies that Link should destroy (this can be easy by slingshotting them). The key to defeating Barinade is to throw the boomerang at the middle part of the boss to stun him. Barinade’s electric attacks can be hard to dodge, and the Biri can be overwhelming, but shouldn’t be too much of a problem.

Phantom Ganon can be found at the end of the Forest Temple and is the fourth boss. The boss room is surrounded by several of the same paintings. Several Phantom Ganon on their trusty mounts gallop across the board and the player will have to decipher which Phantom Ganon is the real one (it will be the one that is a different color from the rest) and shoot him with an arrow. It can be tricky at first.

After hitting Phantom Ganon with an arrow three times, he will come out of the board to fire electric bullets at Link. It’s a perfect workout for the Battle of Ganondorf later, which uses a similar approach. Hit the Electric Bullet back and forth and it will eventually hit and stun Phantom Ganon. Repeat this volley process until victory.

It’s easy to get deja vu while fighting Ganondorf because the name of the game is to go back and forth with electric bullets. Timing is everything and there are several ways to return the electric ball to Ganondorf. Link could fly with his sword, use the Megaton Hammer, or use an empty bottle. Eventually, Ganondorf will mess up and get hit with his own attack, electrocuting him. Link must then shoot him with a light arrow to completely stun him, opening him up to attack.

3 Ganon is a visually epic ending for Ocarina Of Time

Ganon is incredibly intimidating thanks to the glorious lighting effects that make this fight as epic as it gets. Overall, the strategy to defeat him is to hit his weak point – his tail. Link can fire his Light Arrows to briefly stun Ganon, giving him enough time to reach his tail. The easiest way is to just roll between his legs. From there, just try to stay behind him and cut his tail. There are two phases in this fight. At the end of the first phase, Link will have to grab the master sword. The second phase is more or less the same.

2 Link must brave the elements to defeat Twinrova

Twinrova is a long boss fight found at the end of the Spirit Temple. These Gerudo twins make up the eighth boss and are fought in two phases. The key to defeating both phases is to use the Mirror Shield to reflect Fire and Ice attacks. Each twin has a different element, and Link must hit a sister with the opposing element. The second phase begins when the sisters merge to form a singular being.

RELATED: The Legend of Zelda: 5 Bosses That Fight Well (& 5 That Are Too Easy)

To defeat this phase, Link must absorb the same element three times with his Mirror Shield. At first, she’ll only throw one item, but she’ll start to mix things up towards the end of the fight. Absorbing the opposing element will damage Link and force him to start the process over, so dodging is necessary. Once Link absorbs three levels of the same element, he will launch an attack towards Twinrova, stunning her. This, of course, must be repeated several times.

1 Bongo Bongo marches to the rhythm of his own drum

Bongo Bongo is the kind of boss that fans have horror stories about. Mainly because of how many things the player has to juggle while trying to avoid the boss’ powerful attacks (including one where he can drag Link off the platform). Bongo Bongo is the seventh boss and fought at the end of the spooky Temple of Shadow.

To see Bongo Bongo, Link will need the Truth Lens equipped. Link must then shoot arrows at both Bongo Bongo’s hands. Subsequently, his eye will be exposed. Shooting his eye will stun him, leaving him vulnerable to attacks. In the process, the Hover Boots can help ease the frustrations caused by Bongo Bongo’s battery.

NEXT: 10 Major Changes Age Of Calamity Makes To Breath Of The Wild’s Story

Michael is a game list writer for CBR who has been playing for as long as he can remember. Some of his favorite series include Uncharted, Final Fantasy, The Legend of Zelda, and Mario Kart. He is an avid trophy hunter who is no stranger to writing trophy guides to help other trophy hunters. Beyond the game, he’s a huge fan of his beloved Detroit sports teams, for better and for worse.

yogi: Lord Krishna played “made In Pilibhit” flutes 5,000 years ago, according to Cm Yogi | Bareilly News