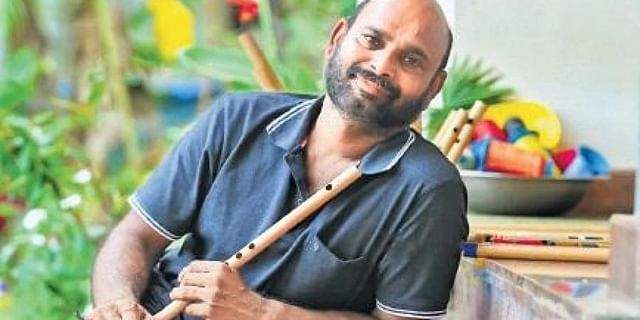 Where the flutes find their melody

KOCHI: It took five years for Pramod Chandramohan to master the art of flute making. Before that, he played flutes that he bought at festival markets. When Pramod started out, he didn’t even know the basics of flute making. But the young craftsman, who started playing flutes three decades ago and making them 10 years ago, has come a long way now.

On his porch and workspace, the Alapuzha native has crafted over 50,000 flutes. “Ten years ago I ventured into the intricate art of flute making. A flute is not just a multi-holed instrument. At the time, no one around me knew them. Even the internet had little information about making flutes. All data related to their cutting and cleaning. A stranger encouraged me to continue my research on manufacturing techniques,” he said. He adds that flute making is not magic. Anyone can make one if they have the patience. “But it takes years of practice, learning, and trial and error,” says Pramod.

Ironically, Pramod was never phenomenal at playing the flute. But to make a flute, you have to know how to play it, he says. “Master Subash Cherthala taught me the basics. When he was busy with shows and events, I practiced alone at home,” he recalls.

However, Pramod never owned a flute at the time. The desire to own one is what drove him to look for ways to make one. Initially, he made flutes from PVC pipes. Soon he started sourcing bamboo from nearby places. “Once I started to focus on making flutes, I invested more time in sourcing bamboo even in other districts,” he adds. For five years, Pramod has been making flutes from bamboo imported from Assam.

It took Pramod a year to make his first flutes. He gave it to his teacher for quality control. “The bamboo was a little twisted. My teacher asked me to keep doing more,” says Pramod. The 48-year-old now makes flutes that render Carnatic and Hindustani tunes and the lightweight six-hole variety for playing background sheet music. “For correct adjustment, the position and diameter of the holes must be precise. It changes from artist to artist,” he says.

To dig holes in the surface of the wood, Pramod heats iron rods 7 to 13 mm in diameter. “Once the mouthpiece is made, I blow on it to get the right scale and the right notes,” explains Pramod. This is what distinguishes his flutes from mass-produced ones. “Now I can make a flute in an hour,” he beams. The largest flute he made is 83 cm long.

Pramod’s flutes have buyers everywhere, including flautists, Subash Cherthala, Rajesh Cherthala and Shahjahan. “It is my dream to make a finely tuned flute for the all-time great flautist – Pandit Hariprasad Chaurasia,” says Pramod. The artist’s flutes have also featured in Malayalam films including Thanneer Mathan Dinangal and Ramante Edantottam. With every flute he makes, Pramod says he learns something new.