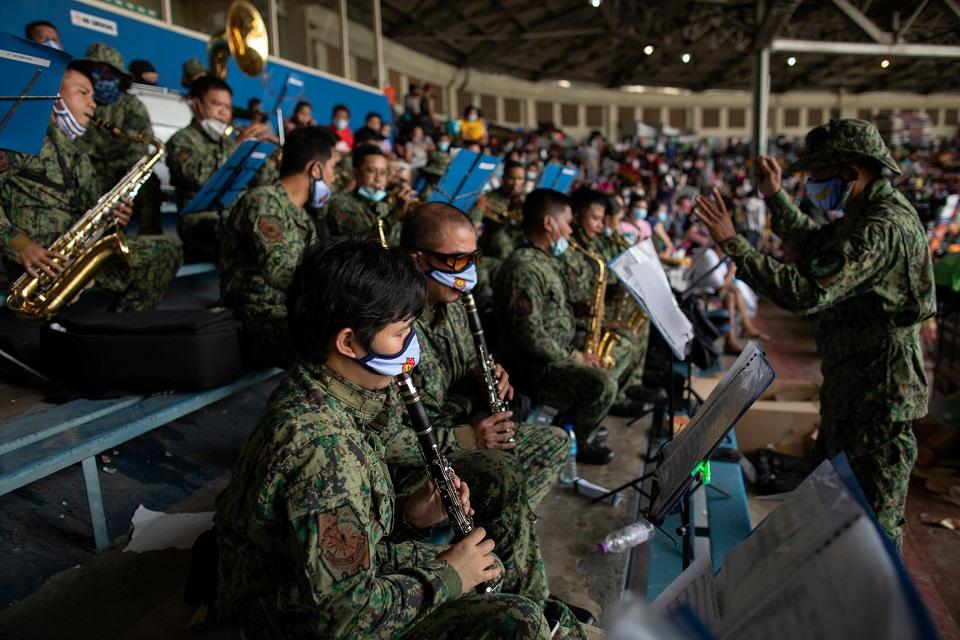 Over the weekend, the Philippine National Police sent a group of police officers to perform in front of the thousands of locally displaced people at the Rizal Memorial sports complex.

The situation at the stadium has already become a source of concern, as social distancing does not appear to be observed among the approximately 7,500 Filipinos awaiting return home to their province through the government’s Hatid Tulong program.

Now, a photo taken by Reuters reporter Eloisa Lopez on Saturday showed PNP musicians adding to the numbers in the stadium, their masks down so they could blow into wind instruments – amid the threat of COVID-19, an infectious disease that spreads through respiratory droplets and possibly even smaller airborne particles.

According to Lopez, the group performed a song by Rey Valera.

Inside, a PNP band performed a Rey Valera song … pic.twitter.com/2pBa37jqN2

The government has stressed that guidelines against the spread of COVID-19 must be followed by the public, including physical distancing and wearing masks.

According to the World Health Organization, transmission of SARS-CoV-2, the virus that causes COVID-19, â€œcan occur through direct, indirect or close contact with infected people through infected secretions such as saliva and respiratory secretions or their airways. droplets, which are expelled when an infected person coughs, sneezes, talks or sings. “

The WHO also acknowledged scientists’ concerns that the virus could be carried by particles smaller than droplets, but stressed that droplet transmission is dominant and did not say it is spreading throughout the world. air.

According to The Guardian, British researchers are currently measuring the quantity and size of droplets and aerosol particles that can be generated by singing and using wind instruments. The study is being conducted after some outbreaks of the disease have been linked to choirs.

The Missing Link is a fan-created sequel to Ocarina of Time • Eurogamer.net