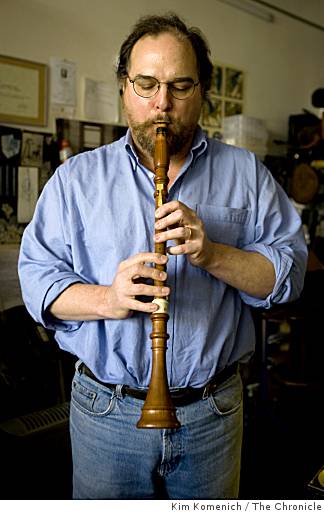 The passion of the wind instrument repairer: baroque flutes

When Daniel Deitch was growing up in Los Angeles in the 1960s, music was his food. His parents were former beatniks who constantly played music – from Beethoven quartets to John Coltrane to Henry Purcell and the Rolling Stones.

“I’ve been blessed with exposure to all kinds of different music, from the time I was in the womb,” Deitch said. “And even though I didn’t know I was a musician until I was a teenager, there’s always music in my head. There always has been.”

But he found his livelihood in repairing woodwinds and making baroque flutes. At Deitch’s Woodwind Workshop, a tiny storefront on Clement Street near 27th Avenue in San Francisco, he creates 12 to 15 baroque flutes a year. Using digital calipers, Deitch meticulously matches the measurements of each instrument to classic 18th-century flutes.

Deitch likes precision and craftsmanship. He was apprenticed to the late Erwin Burger, a Swiss émigré who operated the woodwind and brass shop on 10th Street. Today, he devotes 80% of his time to repairing and restoring flutes, clarinets, bassoons and oboes.

“I make sure their instruments are properly tuned so they don’t have to compensate for the instrument, so they can relax and play it. I make pad adjustments and mechanism adjustments, modifications key.”

Deitch, a bearish man who speaks softly and seems constitutionally unflappable, opened his workshop in 1994. It’s tiny, about 300 square feet, and with his collection of woodworking and metalworking tools, instruments vintage and smells of linseed oil and granadilla dust, there’s an Old World vibe – like stepping into Geppetto’s studio.

A brown bassoon, reproduced by Deitch from a 17th-century original, leans against a wall. A large cabinet accommodates clarinets, flutes, oboes and piccolos awaiting repair or ready to be recovered.

“I’m a bad businessman,” Deitch says. “And she turned it around so we could make some money, finally.”

The Deitchs live in an apartment in the Richmond district and have no children.

In addition to symphony and opera professionals, their clients include music teachers, college newbies, and even retirees learning an instrument for the first time. One of the regulars, a clarinet teacher, knocks excitedly on the door as Deitch explains the four components, called articulations, of the baroque flute.

“I’m sorry, Daniel,” she apologizes. She’s late for a class, and one of her clarinet’s 17-keyboard doesn’t properly seal the tone hole. “The pads are made of felt,” Deitch explains, “and felt reacts very badly to humidity, it’s what you blow into the clarinet all the time. Moisture attacks the pads, causing them to change of shape.”

Because the pad was not sealed, the clarinetist had to compensate by pressing very hard on the key to get the sound out. While the customer waits, Deitch uses an old-fashioned alcohol burner to heat the key cup and the shellac that holds the felt pad. It adjusts the angle of the pad; it takes less than five minutes.

“Danny is a wonderful fixer, a perfectionist,” says Philip Fath, 80, a former principal clarinetist with the San Francisco Symphony Orchestra and San Francisco Opera. “And he’s not just a mechanic. He plays multiple instruments. He’s an intellectual. This guy is high class.”

Repairs pay the bills at Deitch’s Woodwind Workshop, but flutes are his passion. He makes nine different models, which take between 20 and 80 hours to build, and cost between $1,000 and $2,000. He likes to use grenadilla, a particularly robust wood from Tanzania, but more often orders French boxwood billets from the Pyrenees.

After turning the billet on a lathe, Deitch drills out the bore that runs inside the flute, then heat treats it to remove the stresses that run the length of the wood. “I have cut the outside very carefully to replicate the dimensions of the original baroque flute. The size of the outside relative to the inside is critical for tuning and response. If the outside is too large d ‘a millimeter, it ruins everything.’

With a 60-hour work week, there’s not much time for his own music. Deitch was a baritone saxophonist with a jazz band for five years, and once or twice a month he plays chamber music informally with a group of friends. In December, he played oboe da caccia in a Bach Christmas Oratorio with the San Francisco Choral Society.

He would like to play more – for any musician, it’s essential to the soul – but Deitch says he finds rewards in repairs and restoration.

“Music is really important to me, and when I can help someone on the path to having the same joy that I get from music – having their instrument work well, work better than they thought – it’s a real joy.”

To see a video of Daniel Deitch’s passion for baroque flutes, go to sfgate.com/video