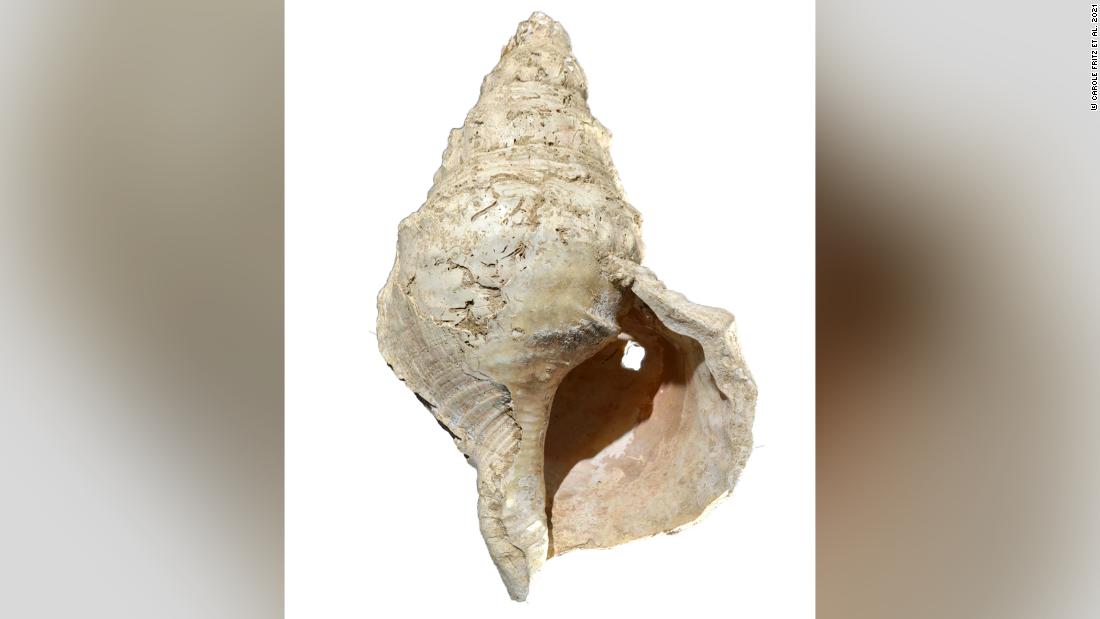 The conch is said to be an 18,000-year-old musical instrument

Scientists analyzing a conch that’s believed to be the oldest such wind instrument in the world have released a recording of what it would have looked like.

The shell was largely overlooked when it was found in the Marsoulas cave in the Pyrenees in 1931, but researchers from France’s National Center for Scientific Research (CNRS); the Toulouse Museum; the University of Toulouse – Jean JaurÃ¨s; and the musÃ©e du quai Branly – Jacques-Chirac released an audio recording as part of a new study published on Wednesday.

The tip of the sea snail (Charonia lampas) shell is broken off, forming an opening 1.4 inches in diameter. The tip is the strongest part of the shell, the researchers said in a press release, so the breakage is not accidental.

There are also traces of cutting, perforation and decoration using hematite, a red pigment used in cave paintings for which the Marsoulas cave is famous.

The researchers worked with a horn player to verify their hypothesis that the shell was used to produce sounds, with the musician being able to produce sounds close to C, C sharp, and D notes.

The fact that the opening is irregular and covered with an organic coating led researchers to believe that a mouthpiece was originally attached.

The presence of mouthpieces on other conchs around the world adds weight to this interpretation, said Gilles Tosello, co-author of the study and archaeologist at the University of Toulouse.

Carbon dating performed on charcoal and bear bones from the same archaeological stratum as the conch shows the objects date back to 18,000 years ago, the researchers said. This makes the shell the oldest such wind instrument.

However, the people who did that didn’t necessarily use the shell to make what we think is music, Tosello told CNN.

The researchers also found similarities to materials found in caves along the Atlantic coast in northern Spain, giving weight to the idea that these people were nomadic hunter-gatherers who moved between the coast Atlantic and the Pyrenees, said Tosello.

They should have moved because they would have no more animals to hunt if they stayed too long in one place, he explained.

Researchers will now work on an accurate 3D replica of the shell to find out more about a small 0.4-inch-diameter perforation in his body, Tosello told CNN. They will also study how far the sound produced by the shell can travel.

The study is published in the journal Science Advances.