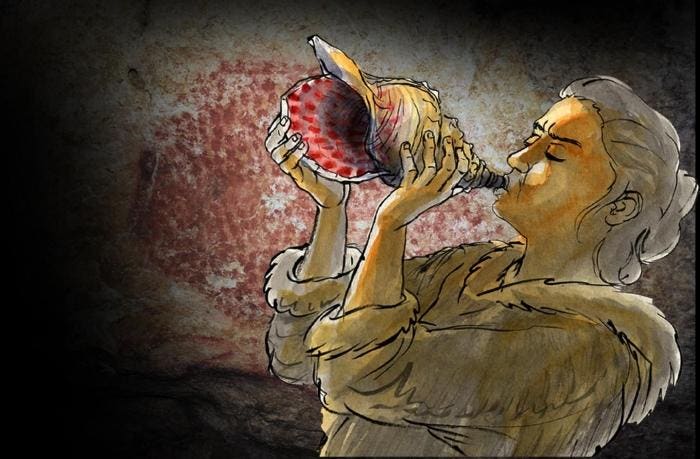 The 18,000-year-old seashell is the first musical instrument of its kind

Almost 80 years after its discovery, a large shell from the Marsoulas cave in the Pyrenees was studied by a multidisciplinary team from the National Research Institute, the Toulouse Museum, the University of Toulouse and the Quai Museum. Branly in Paris.

The researchers were able to play the 18,000-year-old seashell like a French horn, creating at least three different musical tones. The study, published in the journal Scientists progress, argues that the seashell is perhaps the oldest such wind instrument, used for ceremonies inside the cave.

The Marsoulas cave, between Haute-Garonne and AriÃ¨ge, was the first cave decorated with rock art in the Pyrenees. Discovered in 1897, the cave bears witness to the beginning of Stone Age Magdalenian culture in this region, at the end of the Last Glacial Maximum some 18,000 years ago. During a recent inventory of archaeological excavation material, most of which is kept at the Toulouse Museum, scientists examined a large copy of Lampas of Charonia, which had been largely overlooked when it was discovered in 1931. C. lampas is a species of large sea snail that is still found today in the nearby Mediterranean Sea.

The tip of the shell is broken off, forming an opening 3.5 centimeters (or 1.3 inches) in diameter. As this is the hardest part and the rest of the hull shows no damage, the breakage is probably not accidental but man-made. The researchers speculate that a bony tube intended to protect the lips of the blower covered the chipped mouth. At the opposite end, the shell opening shows traces of retouching (cutting) and a tomographic scan revealed that one of the first coils is perforated, presumably to introduce a pin to facilitate the placement of the mouthpiece. . Finally, the shell was decorated with a red pigment (the mineral hematite), characteristic of the Marsoulas cave, which according to archaeologists indicates its status as a symbolic object probably also used during ceremonies inside the cave. .

To confirm the hypothesis that the shell was used to produce sound, the scientists called in a musicologist who specializes in wind instruments. The sound that a wind instrument can generate is controlled by the speed of the air through the instrument (controlled by the player’s lungs), the diameter of the mouthpiece and the length of the vibrating air column. inside the instrument (controlled by perforations along the instrument’s tubular resonator). As the shell has no perforations on the outside, its sound spectrum is limited; however, the musician was able to reproduce three distinct notes that almost matched the tones of C, D and C sharp in modern musical nomenclature.

This makes the Marsoulas shell the oldest wind instrument of this type. The oldest musical instruments in the world are flutes, made from bird bone and mammoth ivory between 42,000 and 43,000 years ago. The conches used as musical instruments found outside Europe are much more recent. Some cultures still use them today for ceremonies.