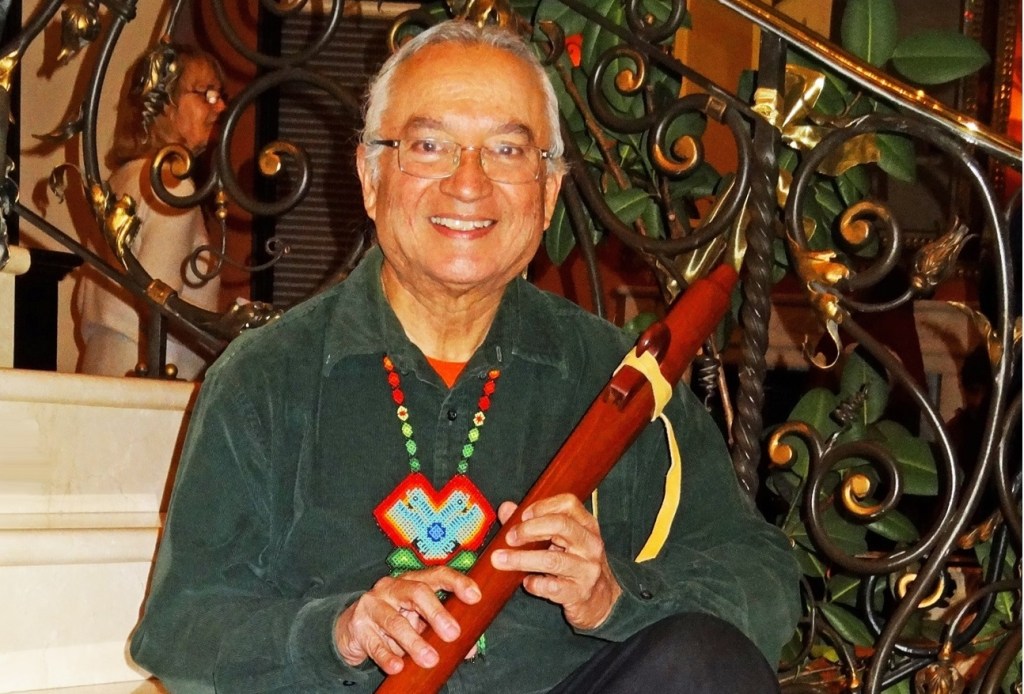 The husband-and-wife team of tenor Julio Batta and flautist Victoria Batta presented the program at Spinet’s March 20 reunion at Keyur and Sweta Shodhan’s home in Redlands. They were accompanied by pianist Ed Yarnelle.

On the February 20 program at David and Nancy Jacobson’s home in Redlands, Natasha Thomas of Loma Linda presented a harp music program and Henry Vasquez of Colton played and presented a variety of Native American flutes.

Victoria and Julio Batta met at the University of Redlands where they both received their music degrees.

Victoria studied flute with Sara Andon at U of R. While at the university, she performed four times in the President’s Annual Honor Recital, and in 2015 she won the university concerto.

She is an elementary conductor in the Beaumont Unified School District and teaches the flute and piano privately.

Julio Batta received his Masters of Music in Vocal Performance from the University of Redlands and has performed in numerous concerts and recitals and in stage operas. He has played the trumpet in numerous harmony orchestras and jazz ensembles, and has obtained his BA in guitar.

He works as an administrator at the First Congregational Church of Redlands where he is also the principal tenor of the Sanctuary Choir and plays the French horn with the whole church. He was recently accepted into Fuller Theological Seminary where he will begin working on a Masters of Divinity this fall to fulfill the initial conditions for ordination.

Julio Batta, with Ed Yarnelle on piano, performed the entire 16 sections of Robert Schumann’s â€œDichterliebeâ€ (â€œLove of a Poetâ€) song cycle in German before singing the latest Tagore poems in Russian.

Yarnelle, a longtime solo pianist, professional accompanist and organist, has offered numerous programs at Spinet over the past 10 years and is the founder of a community orchestra at Crafton Hills College. He has also performed for the Redlands Opera Theater and in the annual Lenten Organ Recital Series of the First Congregational Church.

Julio and Victoria Batta will perform a rehearsal of their Spinet program at 5 p.m. on Saturday, April 7, as part of the musical series at the First Congregational Church of Redlands, 2. W. Olive Ave.

On the February 20 program, harpist Natasha Thomas performed Mikhail Glinka’s â€œNocturneâ€; a â€œSÃ©rÃ©nadeâ€ by Franz Schubert, arranged by Felix Godefroid, plus â€œStellaâ€ by Godefroid marking the bicentenary of the birth of this composer; and â€œLe Rossignolâ€ (â€œLe Rossignolâ€) by Franz Liszt.

Natasha, a junior at Loma Linda Academy, started studying piano at age 5, then harp with Celia Chan Valerio at age 9.

Also on the program for February 20 was Henry Vasquez, playing the Native American flute. Vasquez taught elementary school for 32 years in Los Angeles and is an officer of the Native American Community Council of Riverside and San Bernardino counties.

He said he first became interested in the Native American flute at a 1980s powwow. He spoke about several types of Native American songs from the Pueblo, Plains and California to the woods of the East (with sounds of lakes and water, wind and loons) and southern style of tribal songs.

Vasquez spoke of the ribbon-wrapped fetishes sliding over each flute to center the wind blown into the instruments, in which six holes produce melodies contrasting with the Western diatonic scale. He also demonstrated a double flute, producing drone accompaniment from the single hole on one side of the instrument.

The public is invited to the Spinet meeting on April 17 where Michele Tacchia will conduct Symphonie Jeunesse, a youth orchestra based in San Bernardino. The program is at 7:30 p.m. at the Redlands United Church of Christ, 168 Bellevue Ave.

10 tips for flying with your musical instrument