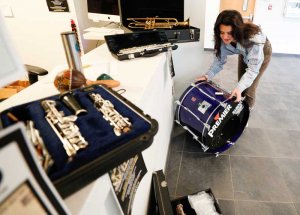 SARATOGA SPRINGS – Skidmore College will host Be Instrumental – a musical instrument campaign benefiting elementary school students in the north of the country, including students in the Ticonderoga Elementary School Marching Band program. The reader accepts lightly used brass, woodwinds and percussion. The campaign started on Wednesday January 22 and ends on Saturday February 8.

In tandem, the Skidmore students hosted “Band-Aid” – a benefit concert on January 25 at Lively Lucy’s in the Falstaff Hall on the Skidmore College campus. The price of admission to the event was an instrument or monetary donation of any amount. All proceeds were donated to the Be Instrumental campaign.

When Evan Mack’s 10-year-old son came home from the band’s rehearsal and told him that some of his classmates were playing plastic instruments or instruments held together by duct tape, the head teacher of music at Skidmore College was stunned. He also learned that many students could not afford to rent musical instruments.

Mack, an accomplished composer and pianist, teamed up with Michelle Hubbs, director of the Office of Community Service, as well as Skidmore students Madison Pappas ’22 and Neil Mellstrom ’20 to create Be Instrumental – a commission from instruments intended to give the gift of music to the children of the schools of Ticonderoga.

“Learning to play on a quality, functional instrument is so important. When you give kids a working instrument, what you’re really giving them is the opportunity to explore what they’re capable of and fall in love with music, ”Mack explains.

Skidmore students have been urged to bring lightly used instruments back to campus that they no longer use when they return from winter vacation for the ride. “A lot of our students have played an instrument at some point, in high school or even college, but no longer use that instrument,” Mack says. “These same instruments can now inspire a new generation of students.

Several local businesses and organizations in the Saratoga area will help spread the word and encourage participation. Esperanto, Smashburger and Kru Coffee offer incentives to those who support the campaign. The Saratoga Performing Arts Center (SPAC) will offer a special classical music package to whoever donates the most instruments. Cole’s Woodwind Shop and Saratoga Guitar & Music Center volunteered to clean and prepare donated instruments before they were distributed to schools.

Ticonderoga Primary School will be the primary beneficiary, but any surplus instruments will be distributed to other schools in the area.

For more information, contact Evan Mack at This e-mail address is protected from spam. You need JavaScript enabled to view it..