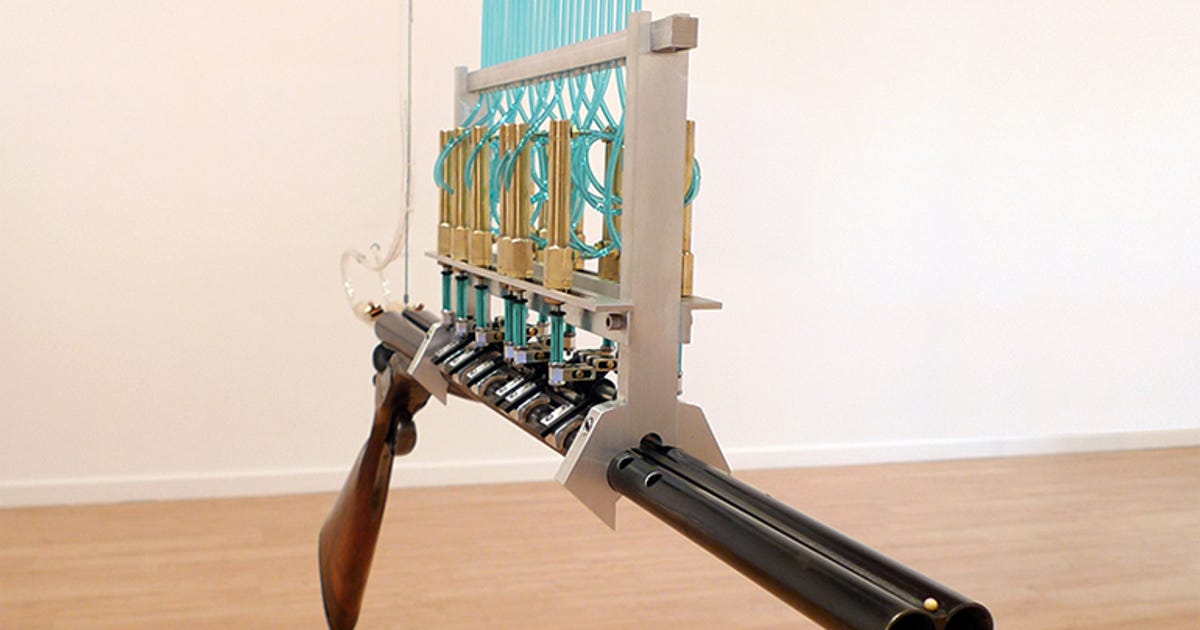 With so much technology being discontinued, we see an increasing number of artists turning to scrap metal as a medium. San Francisco-based Constantine Zlatev uses industrial waste, surplus technology and open-source electronics – and he uses it to deliver a message about the evil of war.

“In the past, classical artists worked mostly with natural materials. Now we have mountains of abandoned technology,” Zlatev explained. “Garbage dumps are modern-day quarries, and artists like me can make anything from these resources.”

The Last Gun and Chifte Kavali (“Double-Barreled Flute”) were made from disabled shotguns, repurposed into mechano-robotic flutes. The barrels of each gun have been drilled with holes to sound notes when compressed air is blown through them, with caps controlled by Arduino microprocessors and, in the case of The Last Gun, a Raspberry Pi board.

Each is programmed to play music based on the annual rise and fall in US arms exports from 1960 to 2009. For The Last Gun, the programming is simple: for each drop in exports, it plays a cheerful, upbeat melody ; with each climb, the music darkens.

For Chifte Kavali, the cannon flute plays more recognizable music. For every increase in exports, the instrument plays “The Band Played Waltzing Matilda” by Eric Bogle, a song which Zlatev characterizes as carrying a “powerful anti-war message”. For each fall, he plays Beethoven’s Ode to Joy.

About Chifte Kavali, Zlatev said: “[It was] created in the form of a futuristic robotic arm that holds a shotgun, an instrument of discord, and transforms it into a harmonious flute, an object that plays music as a symbol of our wisdom, intellect and humanity .”

You can see both flutes in action in the videos below.