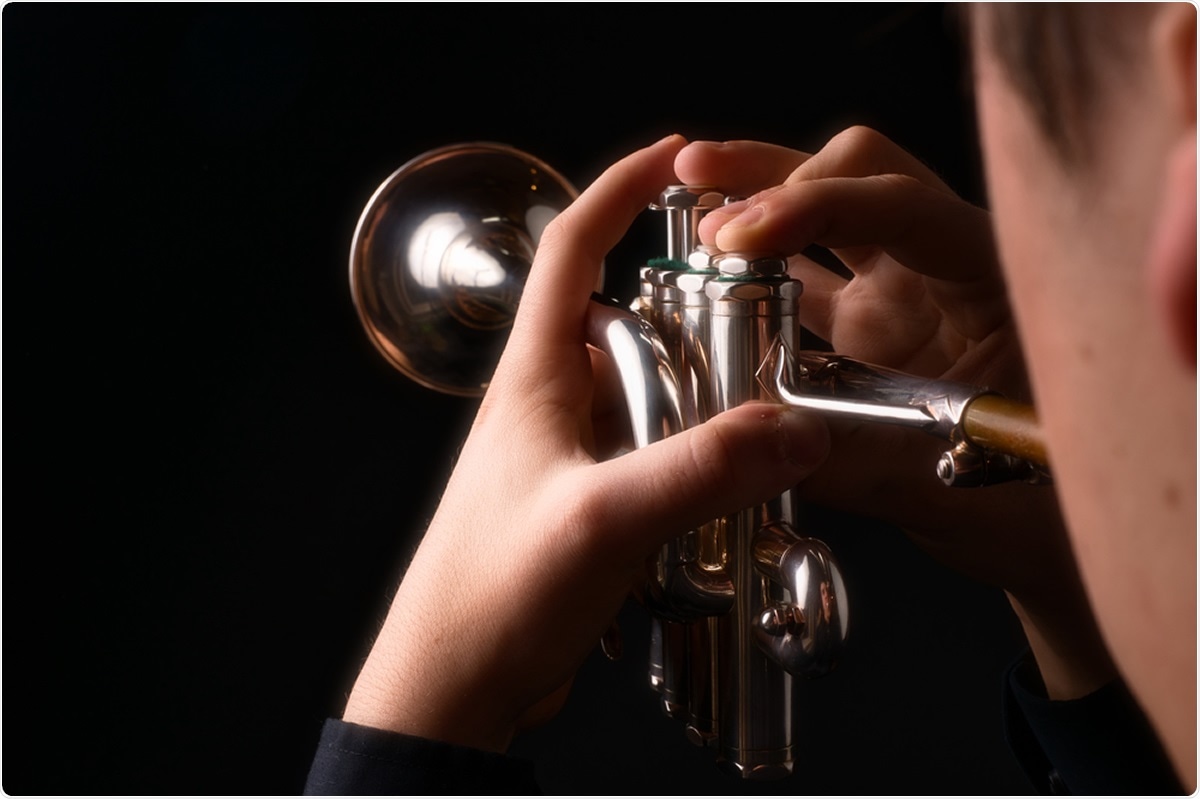 The airborne spread of pathogens has gained great importance in the public eye after the outbreak of Coronavirus disease 2019 (COVID-19 pandemic). In an interesting new research paper published recently on the bioRxiv* preprint server, scientists describe the dispersion of potentially infected exhaled air from singers and wind instrument players, using Schlieren techniques, a visual process used to photograph the flow of fluids of varying density. This could help assess measures to assess the actual spread of infectious droplets or aerosols in such situations.

It is now known that droplets and aerosols, >5 µm and

Previously, several studies have concluded that the propagation of such particles is almost zero at 0.5 m from the mouth of a professional singer, as indicated by the presence of minute disturbances observed at the flame of a candle placed at this distance. from the source of exhaled air. . Later, it was observed that the exhalation of air is much stronger during professional singing than during speaking or breathing.

With wind instruments, the air escape pattern is similar to that of singing, the propagation distance being determined by the rate at which air escapes from the mouth or instrument and the diameter Release.

The current study applies flow visualization and anemometry techniques to study the dispersion of exhaled air in terms of the pattern of propagation and the rate at which the air escapes. The scientists used two methods to observe the flow, namely schlieren imaging using a schlieren mirror and a background-oriented schlieren (BOS).

Schlieren refers to a method of photography applied to the visualization of flows of varying density by exploiting the curvature or refraction of light rays as they cross an interface separating two substances of different densities.

The advantages of these techniques are the possibility of observing density gradients in transparent media, due to variations in temperature or pressure, without distorting the flow field. The measurement field of schlieren imaging is limited by the size of the mirror, ie 100 cm. To correctly visualize the propagation of exhaled air beyond these limits, the BOS was used.

Breathable air is warmer and more humid than surrounding air, leading to gradients that can be captured by these techniques. The researchers looked at wind instruments, which release air in an initial laminar pattern followed by turbulence, and eventually mix with the surrounding ambient air. In singers, air spreads most early in tone production and is highest when singing consonants or when precise articulation is required.

The researchers observe that the distance at which the exhaled air travels and the angle at which the air escapes are both different depending on the instrument and the player or singer.

With wind instruments, the air escapes from the bell, the tone holes, and is blown (flutes) or leaks near the mouthpiece (with the oboe or bassoon). Playing the oboe or bassoon also requires intermittent exhalation through the mouth and nose, as not all the air can escape from the tone holes. Air moves faster when high tones are used, but also during intermittent exhalations. With the latter, the speed steadily decreases thereafter.

Convective flow may also occur, representing air movements of about 0.02 m/s at 85 cm distance from the bell. It is the farthest sensor. With the closest sensor, the highest speed is observed at 45 seconds, corresponding to very transient jets produced by strong breathing air emissions.

Air escapes from the bell over much shorter distances compared to air leaking from the instrument at various points, or during intermittent blowing and other sound-producing practices. Air leaks can travel about 60 cm in the room due to the intermittent exhalation of air through the mouth and nose between sentences. However, it moves within 30cm when playing various notes. At treble, air barely escapes from the bassoon bell, while the highest airflow velocity of the bell is at low notes. Since most tone holes are uncovered at high notes, these produce maximum airflow from those holes.

The air escaping from the bell travels different distances depending on the bore width and the breathing pressure at the time of playing.

With brass instruments, schlieren imagery shows that with most of these instruments, the air escaping from the bell is very turbulent due to the larger diameter of the bell. The air blown into the mouthpiece blows into the bell.

Breathing air rises by natural convection or mixes with ambient air. Factors that determine the shape and distance of the air that escapes from the bell include the musician’s physique and blowing technique, as well as the angle of the instrument relative to the mouth. Distances were measured from the bell, mouth or mouthpiece. Breathing air comes out of the pavilion at about 25 cm in the bass and a little more in the treble. Air can escape from the mouthpiece when the player’s lips are tired, when playing staccato, or when musicians are untrained or older.

With the use of dampers, air leakage is greatly reduced, except with the F tuba and the French horn when a stop mute is used.

The results of the anemometry confirmed the results of the Schlieren visualizations, showing that the flow values ​​are always greater than about 0.02 m/s. Reasons may include finger or hand movement while playing, air escaping from tone holes, breathing between musical phrases, or other convective airflows in the same room. With some instruments, the measured velocity first decreases as the distance to the instrument increases, and then begins to increase. This effect may be due to turbulent flow, producing small vortices that result in varying velocity.

To reduce such flux from all sorts of brass instruments, the researchers said a simple filter could be used, made of cellulose, and glued to the bell of the instrument. This will work because the air that is breathed through such instruments escapes entirely through the bell.

With wind instruments, air leaks out of the tone holes and even leaks from the mouthpiece, in addition to the bell. A filter will therefore not prevent the diffusion of air.

What are the implications?

These data could help uncover the range in which exhaled air, potentially containing infectious particles, could spread during outbreaks of airborne infectious diseases. However, studies only show the propagation range of larger droplets, as small droplets or aerosols are not visualized by Schlieren’s methods. These results show that the airflow does not travel more than 1.2 m in the room.

Second, these patterns relate to air blown by professionally trained singers and musicians. Hobbyists and learners can produce very different exhalation and leak patterns, which can result in a greater volume of air being diffused into the room.

Player movement can also change the speed of breathing air, which also varies with bell diameter and breathing pressure. Air escaping from the mouth or leaking at the mouthpiece has a higher velocity of up to 0.15 m/s.

Using this data, the range of propagation, the dimensions of the escaping air, and the rate at which it escapes and spreads can be estimated for wind and brass instruments and professional vocalists. . This would help quantify the risk of viral transmission during such performances in order to develop the best safety precautions for such situations.

medRxiv publishes preliminary scientific reports that are not peer-reviewed and, therefore, should not be considered conclusive, guide clinical practice/health-related behaviors, or treated as established information.