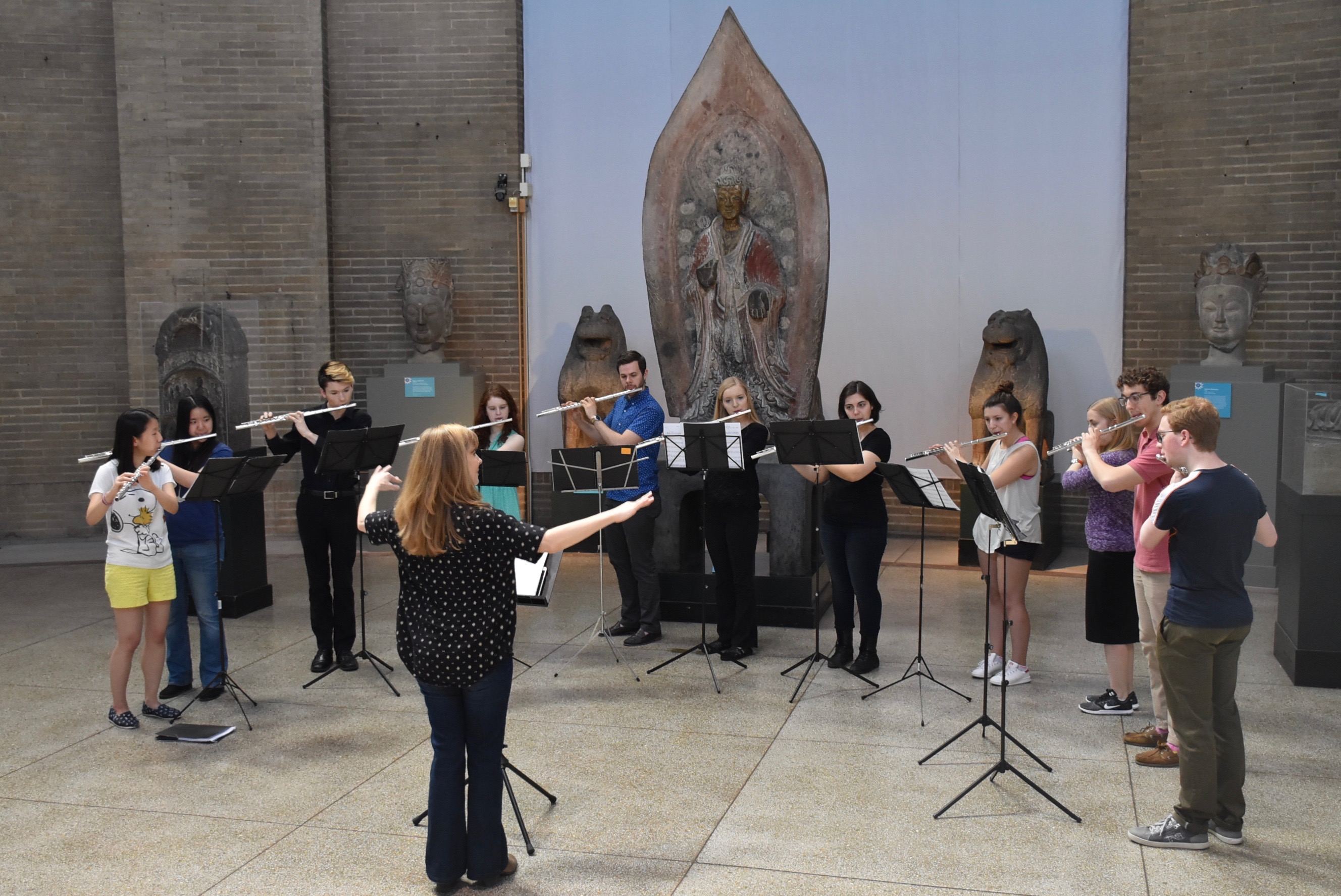 Penn Flutes performs on campus and in the community

The unlikely sound of flutes filled the rotunda of the University of Pennsylvania Museum of Anthropology and Archeology on a recent Friday, luring visitors to the live concert by Penn students.

The dozen-piece group, who perform these “pop up” concerts several times throughout the year, is just a fraction of the flautists at Penn Flutes, now in its 15th year, organized by the Dept. of Music from the School of Arts and Sciences. .

Penn Flutes includes more than 40 musicians, mostly undergraduate students who receive half-course credit for being part of the ensemble, as well as Penn staff, graduate students and alumni, and even members from the community. The entire ensemble gives two official concerts a year; the spring concert is scheduled for 2 p.m. on Sunday, April 23 at Houston Hall.

Michele Kelly, the manager of Penn Flutes, put together the first set in 2002, playing a performance at a “Nutcracker” tea party with eight students.

“I don’t have any auditions. I open it up to anyone who can contribute,” says Kelly, who teaches classes and master’s classes in Penn’s College House music program.

Most students are not music majors, or even minors.

“They study other things, medicine, business, math, engineering. The flute for them is a hobby,” Kelly said. “At the same time, a lot of them are really talented.”

Lavi Ben Dor, one of the group’s student managers, is a junior with a double degree in maths and finance/marketing. While growing up in Wayne, Pennsylvania, he was in the Conestoga High School band and took flute lessons with Kelly, who encouraged him to join Penn Flutes.

“I’ve always loved playing the flute,” he says. “It’s great to enter a different mental space, to focus on the music, to play with the band, to appreciate the musicality of the flute. It’s a totally different experience than it is in my classes.

The library ensemble performs at least four “pop-up” concerts a year, such as one in the Penn Museum’s Chinese Rotunda in February, and another, featuring Ukrainian Bell Carol, performed in the Museum’s Pepper Hall in December .

The entire library also performs in the community. In partnership with the Pennsylvania Ballet, they perform holiday selections at a family tea party with the Sugar Plum Fairy. And Kelly recently formed a partnership with PlayArts in the Fishtown neighborhood of Philadelphia. They played there for children for the first time in March, during an “animal picnic”.​​​​​​​

Sirmina Dremsizova, a mathematical economics student from Cary, North Carolina, said she enjoyed playing for groups of children: “The children were adorable. We asked them to guess which animals we were playing.

Ben Dor and Dremsizova said they made friends through Penn Flutes with people they probably wouldn’t have met otherwise.

“It’s such a close community,” Ben Dor said. “Even though many of us come from different backgrounds and have different specializations, we have a common interest in the flute and an appreciation for music.”

Flutes in the rotunda: Mother’s Day and music