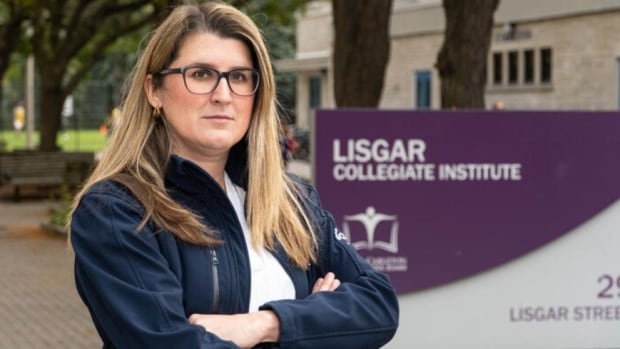 A music teacher at Lisgar Collegiate Institute in Ottawa says it’s time for wind instruments to return to classrooms.

The Ontario Ministry of Education allows wind and brass instruments to be played indoors, but the Ottawa-Carleton District School Board (OCDSB) continues to allow playing outdoors only on the recommendation of Ottawa Public Health.

Extracurricular sports are back in schools and teacher Lani Sommers said that with the right COVID-19 precautions, the whole range of instruments could as well.

â€œThe group creates a sense of community and belonging for these students. They have lost a very valuable and creative outlet and an important source of well-being,â€ Sommers said.

Schools can count on HEPA filters in classrooms, increased distancing measures and mask-shaped bells to reduce the risk of transmission, but Ottawa Public Health (OPH) said that was not enough.

“There remains concern that the air will escape through the finger holes and around the mouthpieces,” he said in a statement Monday.

Stringed instruments and percussion can be played indoors because musicians can wear masks, but woodwinds and brass are too risky, according to OPH.

The English Catholic School Board in Ottawa has similar rules.

For now, music lessons at Lisgar are held outdoors, which Sommers admits to be better than last year but still not ideal.

It is harder for students to get along outside, and the instruments don’t get along as well in the cold, she said.

It is the cold that worries Luke Farha, eleventh grader who has been playing the oboe for five years. He said it was already too cold to play outside and that wasn’t going to improve anytime soon.

“There is definitely a problem with the lack of motivation to train and do better when I know I’m not going to play in a month,” said Farha.

For Grade 11 percussionist Isla Rennison, being in a classroom means having access to an entire cabinet of instruments, while being outside means she is limited to what she can do.

“The music, in my opinion, is a bit bland, as a percussionist I tend to play a lot of instrumentsâ€¦ but at the moment the music is centered on the academic side. It’s not fun anymore.”

Sommers said that without the ability to perform together, the music program has seen a sharp drop in registrations.

â€œThey have been incredibly resilient, but being resilient over time becomes difficult. They are absolutely ready to see a safe return to normal school activities,â€ Sommers said.

The possibility of a safe return depends on more than distancing measures, according to Colin Furness, infection control epidemiologist and assistant professor at the University of Toronto. He also plays the trombone.

â€œWind instruments, of course, present what looks like a pretty ugly risk,â€ Furness said. “They breathe out much harder than if you were sitting still.”

He noted that some of the early COVID-19 super-broadcast events were choir rehearsals and other times people gathered to sing.

Furness said if everyone in the classroom were vaccinated and equipped with high-quality air filters, it would be one thing, but schools are not there yet.

“Without a rapid test, without the vaccination status being known – putting a whole bunch of children in a room blowing instruments is not a good idea,” he said.

“I’m not going to tell you that [COVID-19 is] will spread for sure because we don’t know. But I wouldn’t be prepared to put my child in this situation. “

Keeping children out of regular activities is also harmful, he said, which is why he advocates vaccination and testing in schools so that activities can resume.