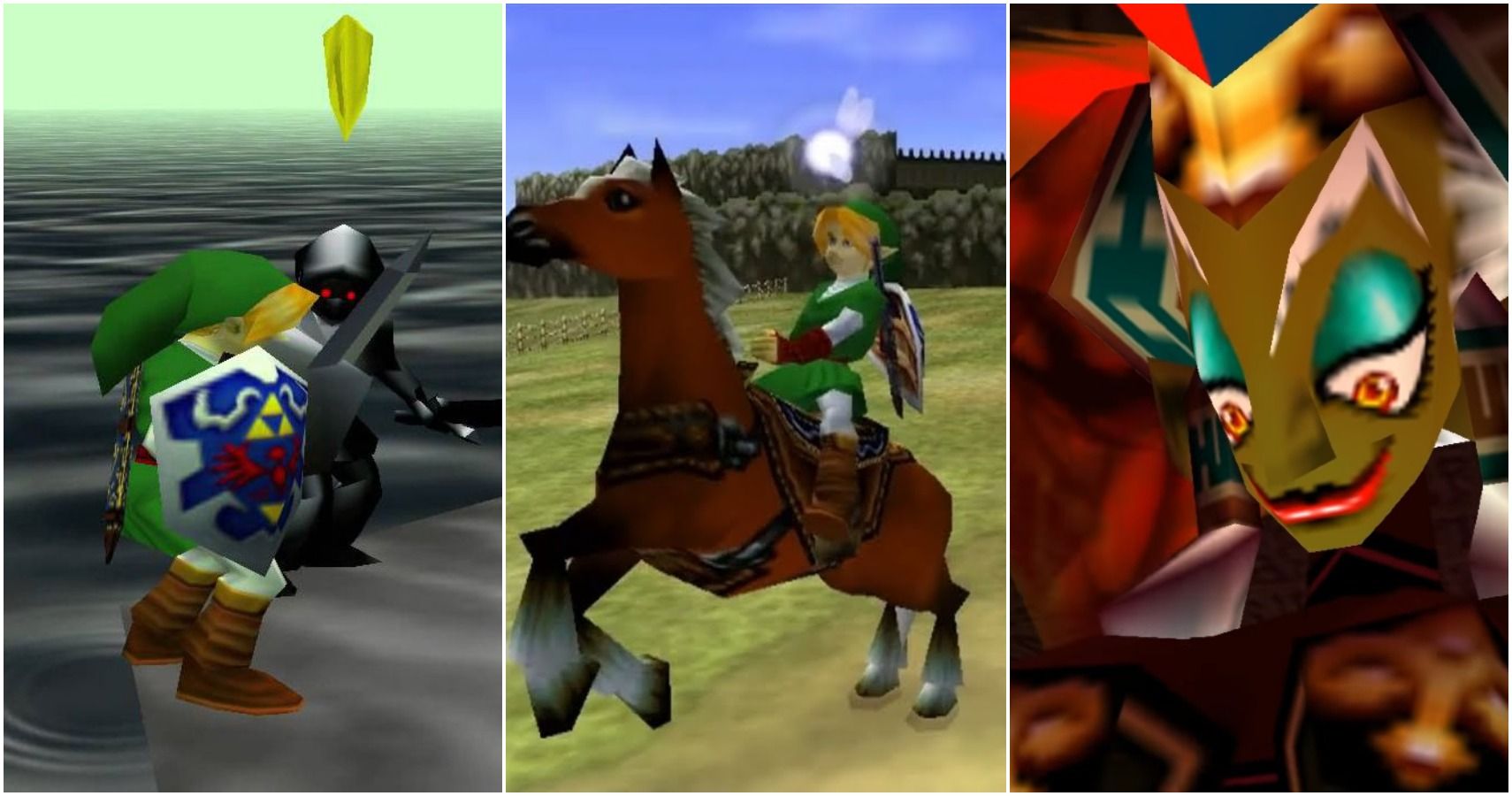 Ocarina Of Time – Every Dungeon and Temple Ranked

Often ranked in the top five Zelda games never created, Ocarina of time is without a doubt a great classic. It featured an epic story, enchantment, horror and adventure and changed THE Legend of Zelda for the best.

RELATED: Zelda: 10 Secret Side Quests Everyone Missed In Ocarina Of Time

One of the reasons it became a classic was through its massive and difficult dungeons; dungeons have been a staple of Zelda from the beginning. Some are fun worlds that are difficult to explore on their own, while others are confusing and frustrating messes. From a visual point of view, structure and difficulty, the Ocarina of time dungeons are everywhere.

This place is horrible. Visually, it is very impressive and features some of the most unique enemies in the game. However, anyone who hates icy and slippery crossings shudders with fear at the thought of crossing this dungeon to continue the game.

The enemies are annoying and the platform is downright broken at times. Combined with the main cave theme which gets very squeaky after an extended time, this is a dungeon nightmare.

Much like the Ice Caverns, the Fortress is impressive with the level of detail Nintendo has entered. So why is he so low on this list? It’s an irritating maze with broken stealth mechanics. The link is hidden or spotted, there is no in-between as in Solid metal gear.

A tiny glimpse of a guard and it’s back to the prison cell to try and rehearse the boring maze of hallways and doors. It’s also just a horrible pile of rock and wall which makes the visuals less impressive. It’s not as irritating in ice caves, but it comes close.

ten
In the belly of Jabu-Jabu

Want to get upset? Try to transport a spoiled Princess Zora through a cave that is constantly trying to kill the player. On top of that, avoid falling into the dungeon, essentially restarting tons of progress that was probably made.

Just to make it even better, the dungeon has one of the most frustrating bosses in the game. It’s the last of the starter dungeons and it shows by setting things up to come. Visually, it’s a bit disturbing because Connect is basically a hike through parts of the body, but it’s awesome at the same time.

Everyone who has played the game knows the horrors of the Water Temple. The constant rise and fall of water levels, the confusing layout, the aggravating flashbacks, it gets old quickly. Even from a visual standpoint, it’s just a bunch of muted blues and grays that feel depressed after awhile.

However, the Water Temple is quite unique and includes one of the most notable pieces in the game. An ethereal plain that is trippy but beautiful at the same time. This is where Dark Link appears as a mini-boss and it’s a refreshing challenge.

The best thing about this dungeon is its main area containing the giant skull; it gives the dungeon that massive reach which can be intimidating. The enemies Dodongos and Lizalfos are quite superior to the enemies of the previous dungeon, and it contains some great puzzles that require a lot of crossing, but not to the point of irritating.

The only really disappointing aspects of this dungeon are the forgettable music and that the boss fight with King Dodongo is ridiculously easy, even for a newbie boss.

7
The temple of the spirits

This temple is a prime example of a mixed bag; it presents some really difficult puzzles, but the enemies are easy enough to feel like a temple to start with. The music and the boss fight are some of the best in the game, but the aesthetic of the temple itself is absolutely boring.

The aforementioned boss, Twinrova, is by far the best thing about the Temple of the Spirits. With two different phases (which was not normal for a Zelda game at the time) that keep the player on their toes at all times, this is a boss that doesn’t get enough fan attention.

6
Inside the Big Mojo Tree

For a The Legend of Zelda game to really suck the player, the first dungeon must be the perfect starter. Ocarina of time delivered this with the interior of the dying Mojo tree; it introduces the player to many central aspects of gameplay, puzzles, and items to use.

RELATED: 10 Things You Didn’t Know You Could Do In Legend Of Zelda: Ocarina Of Time

It’s visually impressive, there’s a scary yet intriguing atmosphere, and there’s a great boss to really test a newbie player. It’s easily one of the best starter dungeons in the entire series, unless the player has arachnophobia.

Speaking of spooky atmospheres, this whole temple is one big haunted house trip. It features some of the best puzzles that require the use of Hover Boots and Lens Of Truth to navigate. It has a lot of really terrifying enemies for kids who have played the game and a really good boss fight.

However, the visuals tend to fade quite quickly. It’s just a bunch of black, gray, and dark green. It’s not the best color scheme, but it makes up for it with almost eldritch horror patterns in the temple.

While the Shadow Temple is all about the living dead, ghosts, and demons, it’s actually the Forest Temple that remains the scariest dungeon. Every second in the temple is just threatening; it’s filled with ghosts and monsters that can appear out of nowhere at any time.

There is also this weird feeling that the player is being watched by something. Combined with the scariest music in the game and a solid boss, this is a brilliant first dungeon for adult Link to tackle.

3
Bottom of the well

The Forest Temple was scarier, but the dungeon hidden under the well in Kakariko Village is a nightmare. Every second of this dungeon belongs to a survival horror game similar to silent Hill. It has visuals far superior to those of the Shadow Temple, purposefully confusing puzzles and traverses – the fuel for every child’s nightmare.

RELATED: The Legend Of Zelda: 10 Ocarina Of Time Memes That Are Too Funny

The Dead Hand is one of the most infamous enemies of Zelda story for a reason. This enemy alone is enough for any child to stop playing and walk out of the room. It’s the dungeon that probably created a few horror fans.

The final dungeon in the game puts an end to things correctly: it is a giant glove of all the mechanics, puzzles and items that the player has experienced during their adventure. There are even elements of the dreaded Ice Caves in this gauntlet, so this dungeon can get a little overwhelming but never enough to stop the rage.

That’s all before the final boss against Ganondorf himself, which is a grueling affair in itself. It’s visually exceptional, everything is huge and epic: it looks like a grand finale. One of the best details is that Ganondorf’s organ grows louder and louder as Link walks through the castle.

1
The Temple of Fire

It’s hard to choose between Ganondorf Castle and the Fire Temple – both are amazing in different ways. On closer inspection, the Fire Temple is the only Temple that reaches near perfection. The visuals remain impressive throughout, and the puzzles for collecting and using the megaton hammer are a lot of fun.

The only downside is that the boss fight with Volvagia is by far the least impressive part of the temple. Enemies are also fun to fight in this temple. What also sets this temple apart is that it is one of the longest dungeons; sometimes it feels like the player is spending several hours trying to get out of it.

NEXT: Legend Of Zelda: 5 Most Powerful Versions Of Link (& 5 Weakest)

Every boss fight from least to most difficult