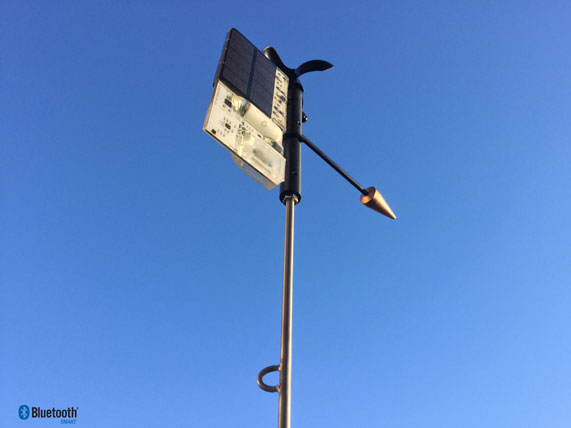 When the initial version of the SailTimer wind instrument was announced a year ago, it was the first masthead anemometer with a digital compass in the wind direction arrow. It’s wireless and solar powered, with electronics encapsulated in the tail. If you are using it with a keelboat, there are no wires to install at the bottom of the mast.

It’s also submersible, so if you take your smartphone or tablet in a dinghy, you can have GPS speed and tracks, mapping and wind electronics for the very first time. You don’t need to have a 12 volt battery on board. And now we’re excited to present the first official photos of the new SailTimer 2016 wind instrument, which is now rolling off the assembly line and in stock for shipment.

New design features and improvements:
â— The tail has been redesigned to be incredibly thin and more aerodynamic, reducing the thickness of the solar panels by 40% and reducing the thickness of the rest of the trailing edge to just 3.5mm (0.138 â€³).
â— New submersible shut-off switch for storage, with an LED light to indicate when it turns on.
â— Arrives with the battery charged and ready for use.
â— The tail is 3/4 â€(19mm) higher for more sensitive wind direction in very light winds.
â— The main electronics and battery have been moved to the leading edge of the tail, to create more of an airfoil shape with a thin trailing edge.
â— New black and white design. The white circuit board and battery reflect radiant heat. The wind cups are now black for better UV resistance.
â— Improved antenna layout to provide longer transmission distances for tall masts and keelboats.
â— Advanced encapsulation technology on the tail reduces weight with a very fine and smooth surface.