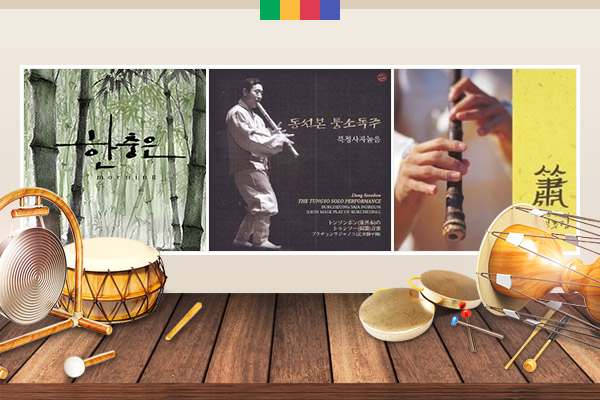 The three most played string and wind instruments during the Unified Silla period known as “samhyeon samjuk삼현삼죽”. “Samhyeon”, three stringed instruments, are gayageum가야금, geomungo거문고, and bipa비파, while “samjuk”, which means three bamboo instruments, refers to daegeum대금, junggeum중금, and sogeum소금. Gayageum and geomungo are still widely played, but bipa playing techniques have long since been forgotten. Unfortunately, the junggeum and sogeum wind instruments suffered the same fate as the bipa. But sogeum is back in fashion these days. How was it possible? The Silla sogeum was played until the middle of the Joseon period, but it was gradually replaced by a Chinese instrument called dangjeok 당적, which literally means Tang dynasty flute. This bamboo transverse flute from China was modified after Korea’s independence to be used as a teaching tool for Korean students’ music lessons and was renamed sogeum. It is distinguished by a sharp and clear sound. Here is a sogeum piece titled “Morning” performed by Hang Chung-eun.

Sogeum, which literally means a small wind instrument, is smaller and softer sounding than the daegeum. But the biggest distinction between the two instruments is the existence of the cheonggong청공, a hole through which a thin membrane passes. Cheonggong is located between a daegeum’s mouth and finger holes. When air is blown into the mouthpiece, the membrane of the cheonggong vibrates to produce a very unique sound. Some people find the sound irritating, but once you get used to it, that timbre is what makes the daegeum special. It is even said that the level of expertise of a daegeum player is determined by his ability to vibrate this membrane. The next music we are going to hear is a tungso퉁소 piece. Tungso was widely played, from the royal court to private homes. But it has lost popularity over the years and is now only played as an accompaniment to the Bukcheong lion dance. It is therefore encouraging to see recent attempts to revive the instrument and use it to play various pieces of music. The tungso is similar in size to the daegeum and even has a cheonggong. But the biggest difference between the two instruments is that while the daegeum is played transversely, the tungso is held vertically. Next is “Payeongok” from the Bukcheong Lion Dance backing tracks performed by tungso virtuoso Dong Seon-bon.

Now let’s talk about a more familiar wind instrument, the danso. Composed of two Chinese letters, the “dan” meaning short and the “so” of tungso, the danso literally means a short tungso. But the word “so” encompasses many more instruments than those played vertically like the piri or the taepyeongso, but also instruments like the flute that a player does not blow directly into the hole but over the edge of the hole. Anyway, the danso does not appear in old records, which implies that it is a fairly recent musical invention. People struggle to make sounds with a danso at first, but once you get the hang of it, it’s pretty easy to play and fun to listen to. Children learn to play the danso as an introductory instrument to familiarize themselves with the gugak. The final piece of this week’s episode is a dance piece called “Spring at a Guard Post” written by a North Korean composer. You will be amazed at the range of sounds a danso can produce. Here’s Lee Yong-gu performing “Spring at a Guard Post.”

Spring at a Guardhouse / Danso by Lee Yong-gu