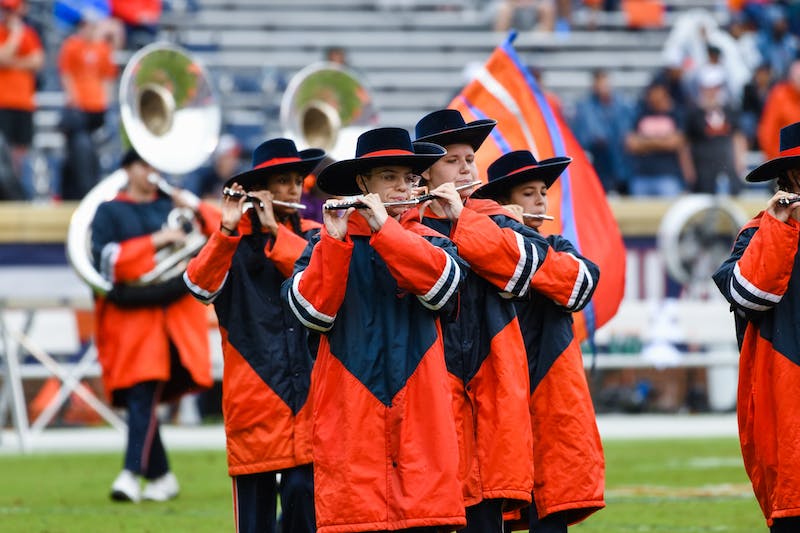 The University’s change to its hiding policy for student musicians at Scott Stadium follows a petition asking the Cavalier Marching Band to play wind instruments that has garnered more than 8,400 signatures since its publication on Monday. Previously, the University banned the group from playing wind instruments in the stands during matches, citing an excessive risk of the spread of COVID-19.

The students and band members challenged the University’s decision to ban them from performing, citing research indicating that vocalization – including talking, singing, and screaming from fans in the stands – has a greater ability to spread voice. aerosols as wind instruments.

The mask’s tenure has been extended until the end of the fall semester, with the exception of “particularly difficult” activities while wearing a mask – such as marching band performances, cardio exercises at IM-Rec facilities and some theatrical performances – by a university email sent Friday afternoon by Provost Liz Magill and COO JJ Davis

“The marching band is working to implement similar public health measures, such as obtaining bells for wind instruments and will return to play in the stands during football matches as soon as possible,” the email said. .

According to Ethan Van Berkel, a freshman of architecture and tuba player in the squad, it could be as early as the Cavaliers’ next game – this Saturday against Georgia Tech.

“[Our director] ordered the bell lids and they will arrive here [Saturday]so we’re very happy to be back in the stands as soon as possible, ”Berkel said.

Berkel believes the petition played a role in changing the university’s policy, especially because it touched so many people – one commentator sent in support of Georgia Tech, and Berkel said the petition had also reached friends from other schools like James Madison University.

The University now joins most of the other Atlantic Coast Conference schools that have worked with their groups to bring live music to sports games. Virginia Tech allows group members to play with additional bell covers and masking precautions, and the Georgia Institute of Technology group has split into two groups that play in the stands with additional masking and bell covers. .

Maria Parnell, a fourth-year engineering student and creator of the original petition, plays the trumpet in the marching band and said she is grateful that the petition has reached so many people.

“It was really great to see everyone coming together from different parts of U.Va. and supporting this common cause, ”said Parnell. “I think [the University] since there was a lot of momentum behind this problem.

While Berkel worries about what the mask’s tenure extension will mean for the group in indoor basketball games, he can’t wait to be back in the stands for now.

“We have this small victory, and we are going to appreciate it,” Berkel said.