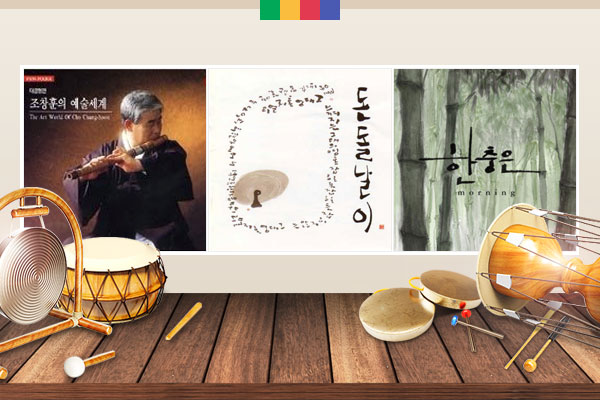 Traditional Korean wind instruments can be divided into two groups. A band is played with a reed attached to instruments, such as the piri í”¼ë¦¬ or the taepyeongso íƒœí‰ì†Œ. The second group consists of instruments that are placed directly on the lips of the player, such as the daegeum ëŒ€ê¸ˆ. Reed instruments produce a fuller, less windy sound than their counterparts.

People mistakenly think that Korean wind instruments all sound the same, but today we are going to listen more carefully and try to distinguish their unique sounds. The first is daegeum. This bamboo flute-shaped instrument has small openings on one side that you block off to make sounds and an opening on one end where you place your lips and exhale. There is another opening called â€œcheonggong ì²­ê³µâ€ between the mouth opening and the finger holes. This opening is covered with a thin membrane of the reed called a “cheong”. The sound echoing through this membrane is what sets the daegeum apart from other wind instruments. Try to listen to the next composition of the daegeum, paying special attention to the vibrations of the â€œcheongâ€.

Daegeum is often compared to the conventional transverse flute. While the flute produces a clear and light sound, the daegeum sound is rather coarse due to the reverberation of the reed membrane, giving the instrument a unique character.

Some people say that such a robust sound is a defining characteristic of all Korean musical instruments. For example, traditional stringed instruments like the haegeum í•´ê¸ˆ or ajaeng ì•„ìŸ sound rougher than the violin or cello. The tungso is another wind instrument with a â€œcheongâ€ or reed membrane. This wind instrument resembles the daegeum, but is held upright with the lips, much like the oboe.

It has been performed quite frequently in the past, but it has been so forgotten that it is now almost only heard during the Bukcheong Lion Dance ë¶ì²­. Young traditional musicians have tried to bring back the tungso and use it more often in their compositions, but most people are still unfamiliar with the instrument.

Let’s listen to two tungso pieces today to familiarize ourselves with this rarely heard instrument. These are folk songs from Hamgyeong Province, “Dondolnari” and “Jeongapseong Taryeong”.

Since the sogeum is smaller than the daegeum, it produces a higher, thinner sound, and the absence of a reed diaphragm results in a clearer, more conventional sound. Danso also sounds similar to tungso, as it also doesn’t have a ‘cheong’.

However, the sogeum is considered to be more versatile because it has a wider playing range than the danso, which is why traditional musicians often use the sogeum in their creative pieces. This week’s episode will end with “Laan” composed by Gye Seong-won ê³„ì„± ì› with Han Chung-eun playing the sogeum.