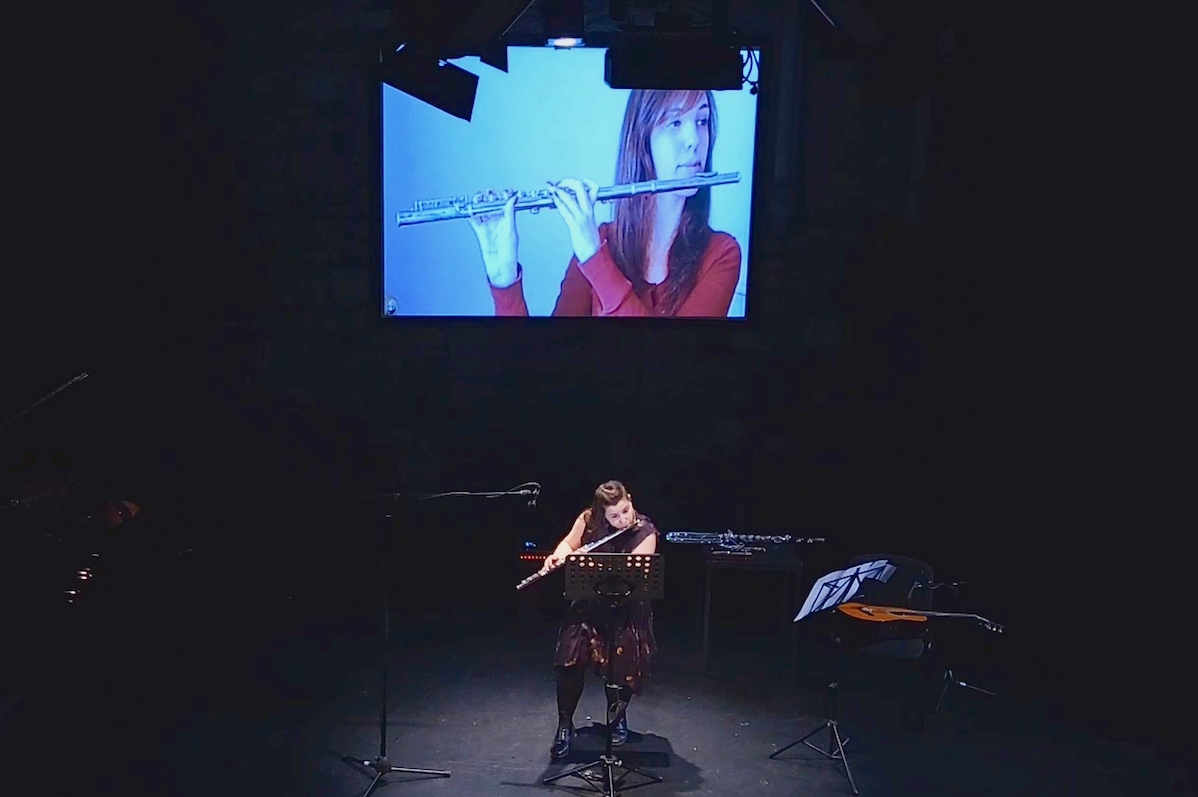 Andonovska’s recital opened with what was by far the most expansive work of the evening, the work of Nicole LizÃ©e Tarantino Studies (2015). This 22 minute play features significant video screening of Quentin Tarantino films, particularly the action footage from Kill Bill – but these films are heavily manipulated: only a few clips are used, and these clips are curly, glitch and spliced â€‹â€‹to reinforce the elegance and musicality of Tarantino. Andonovska is also visuals as well as music: at one point, she was holding her bass flute like a sword in a duplication of Uma Thurman on the screen behind her, preparing for a fight. The overall effect is a quick and groovy counterpoint between the two visual sources and the two sound sources, with the four “voices” remarkably even and intertwined. Tarantino Studies is also a play particularly well suited to Andonovska in particular: its daring stage presence shares something with Tarantino’s cinematography.

Next are four smaller pieces. The first was that of Paul MÃ©fano Hanging strokes (1980), a now classic piece for solo bass flute. Then we had the one from David Fennessy Bridge (2016) for flute (double piccolo) and resonance piano, and the Irish premiere of Bekah Simms Skin landscape (2017) for amplified flute and electronics. Skin landscape was a nice piece, with great sounds and a lot of momentum, but it didn’t seem like it really got anywhere else. Bridge consisted of several juxtaposed ideas that did not come together in an interesting way.

In a brilliant lineup, Andonovska ended the recital with the raucous and intriguing of Brigitta Muntendorf Public Privacy # 1: Flute Cover (2013). This is a piece for flute and video, and the video is a collage of other flautists playing, from their homes, on YouTube. This piece predates the pandemic well, but it was interesting to consider how it could have been recontextualized by it.

Overall, I found Andonovska’s recital to be brilliant at times, but a little off-balance. Tarantino Studies was fabulous, but being followed by four short pieces put them in the shadows. However, his typically superb and charismatic playing meant that it was a very enjoyable concert nonetheless.

Melodic logic
The second recital of the evening was given by Scottish flautist Richard Craig. He opened with Richard Barrett’s Valley (2012), a magnificent piece for amplified flute which, in its delicate and sophisticated mastery of melodic logic, reminds me of Bach’s violin partitas. Craig was up to the task, mastering the playful and haunting music with subtlety, color and direction. In its low-key way, it was an explosive opening. (Craig recorded this piece in a 2017 album of the same name released on the Metier label, for the curious.)

The next piece on the program was radically different: that of JosÃ© Manuel Serrano Retratos of Al-Fayum (2021), which premiered tonight, combined Craig’s flute with a richly textured ribbon collage. The composer and performer worked together for a long time to create parts that blended well with each other, resulting in a great job of complex, weird, yet cohesive and satisfying sounds.

Three premieres by two Irish composers have now followed: 48 hours (2021) and Countryside II (2019) by SeÃ¡n Ã“ DÃ¡laigh, and Double (2020) by Fergal Dowling. DÃ¡laigh’s pieces, which Craig played as a duet, were competent without being particularly striking, and tended to sound a bit like a simple succession of contemporary flute sounds.

The band came back for Double: here it was a pre-recorded version of what Craig was playing live, but with variations that made the song heterophonic. It was a tense and uncomfortable play with allusions to perpetual mobile, and the heterophonic game created some nice surprises.

The evening ended with Egidija MedekÅ¡aitÄ— Nigamagamini (2014), in which Craig’s flute was engulfed in an expansive and lush ribbon texture. It was a beautiful play, and a beautiful end to the festival.

Although billed separately, the two concerts seem to have been designed as a pair, and indeed they pair well: Andonovska and Craig are very different performers, but they are complementary, and between the two recitals the audience had a picture flattering and broad of both. Contemporary Irish and international flute music.