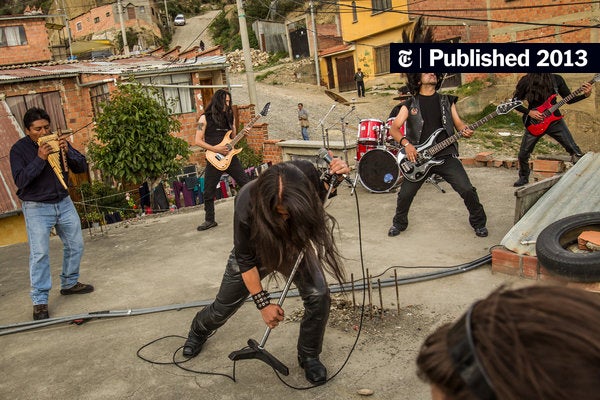 Headbanging in Bolivia on the flutes of yesteryear

Heavy metal would seem an unlikely match for the generally calming sounds of Andean folk music. Yet some metaleros have said that the characteristic aggressiveness of their music has a natural counterpart in a traditional Andean dance and music called tinku.

In small villages like Macha in central Bolivia, tinku dancers clash in bloody battles, a ritual meant to nourish the land with spilled blood and ensure a bountiful harvest or good fortune for a community.

â€œA tinku in Macha is much heavier than any mosh pit anywhere in the world,â€ Mr. Callisaya said.

A surprising version of tinku was seen in La Paz last month during an event organized by the government to promote the Dakar Rally, a motorsport race that passes through Bolivia.

As President Evo Morales, diplomats and ministers watched, a heavy metal band called Alcoholika La Christo (a name that combines the words for alcoholic and a female Christ) broke out. his version of a traditional tinku song accompanied by a group of panpipes, while folk dancers whirled on the tinku steps. The metaleros were all in black, the panpipers wore colorful ponchos, and the dancers circled under colorful feathered headdresses.

Alcoholika frontman Viko Paredes, 35, may have been the first to mix genres. Living in Washington in the late 1990s, he frequented a Bolivian restaurant across from a nightclub that played techno dance music. Music from both places mingled in the streets, and this gave him the idea to merge his favorite music, heavy metal, with the Andean music of his native country.

â€œWhat I’m trying to do is show Andean music with the power of rock,â€ Mr. Paredes said.

Throughout his experiences, he called on Fernando JimÃ©nez, one of the greatest Bolivian zampoÃ±a players.

Mr JimÃ©nez, 50, said combining the musical styles was a challenge.

â€œFolk music is more about conviviality, about fiesta,â€ said JimÃ©nez, pausing to record an album of traditional songs in La Paz. â€œIt’s not aggressive. It was a culture shock.

Virtuoso’s flutes destroyed by US customs