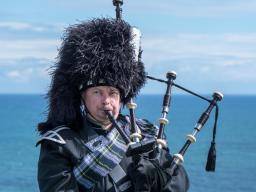 The findings of a case report published in the Thorax BMJ indicate that musicians who play wind instruments may be at risk of developing a “bagpipe lung” – due to yeast and mold contamination – which, at the severe end of the scale, can result in the death.

The term ‘bagpipe lung’ arose out of a case presentation – led by Dr Jenny King of South Manchester University Hospital in the UK – of a 61-year-old man who died of inflammatory lung disease chronic pulmonary hypersensitivity (HP) as a result of breathing exposure to fungi lurking in the wet crevices of his bagpipe.

HP is a disease of the lungs, in which the lungs become inflamed as a result of an allergic reaction to dust, fungus, mold, or chemicals inhaled. If caught early and the allergenic substance is avoided, the inflammation can be reversed.

However, if HP is not diagnosed and the person continues to be exposed to the allergen, parts of the lung may develop scar tissue. Lung scars – also called pulmonary fibrosis – are permanent and can make breathing normally problematic.

There are over 300 known substances which, when inhaled as fine dust, can cause a person to develop HP.

The most common HP problems are attributed to names related to the source of the allergen. For example, “farmer’s lung” is the term for cattle workers when the condition is caused by inhaling mold that grows on hay, straw and grain, or “bird hobbyist’s lung”. Â»Caused by inhaling feather particles or bird droppings, especially young birds.

“Bagpipe lung” is the new causal name in this case.

The cause of HP in the man on file was an enigma; he was not a pigeon lover, and his house had no mold or signs of water damage, and he had no symptoms of connective tissue disease. He had never smoked either.

The patient was referred to the Interstitial Lung Disease Clinic in 2014 with a 7-year history of dry cough and progressive shortness of breath, diagnosed as HP in 2009. Despite immunosuppressive therapy, he experienced reduced tolerance to the patient. ‘exercise over 10 kilometers to 20 meters. .

Despite his severe restriction in lung function, the man played the bagpipes daily as a hobby. His symptoms were progressive, with the exception of a 3 month period in 2011 when he was living in Australia, and his symptoms improved rapidly. Back in the UK, the man’s breathing rapidly deteriorated. He did not take the bagpipe with him to Australia.

As the bagpipe was considered a possible risk factor, samples were taken from the bag, neck and reed protector to sing while the man was in the hospital.

The history of daily bagpipe playing coupled with the improvement in symptoms when man was bagpipeless in Australia and the discovery of antigens in bagpipes, identifies the instrument as the probable cause. Many of the fungi found in this case have been associated with HP.

The authors say the humid environment of the bagpipe can promote contamination with yeasts and molds, making chronic inhalation of offending antigens a likely trigger.

â€œThis report emphasizes the importance of a careful clinical history when evaluating patients with respiratory symptoms. We often associate exposures to birds and pigeons, or living in environments contaminated with mold, as potential triggers for HP. In a large proportion of patients, a trigger is not identified, â€the researchers write.

“In this case, playing the bagpipe, an important pastime in history, was not initially realized as a potential trigger for the development of the disease, and subsequently no antibodies precipitating the serum against the molds. or the mushrooms have not been realized, â€they add.

Although this is an isolated case and the cause of the disease has not been proven, other cases of HP have been reported in saxophone and trombone players caused by fungi and yeast. .

The authors warn that wind instruments of any type could be contaminated with yeasts and molds that act as a potential trigger for HP. They propose:

“Cleaning instruments immediately after use and allowing them to drain would theoretically reduce the risk of growth of microorganisms.

The researchers conclude by noting that physicians should be aware of the potential risk factor for musicians and promote the hygiene of wind instruments.

Find out how, despite regular washing, skin bacteria remain constant over time.