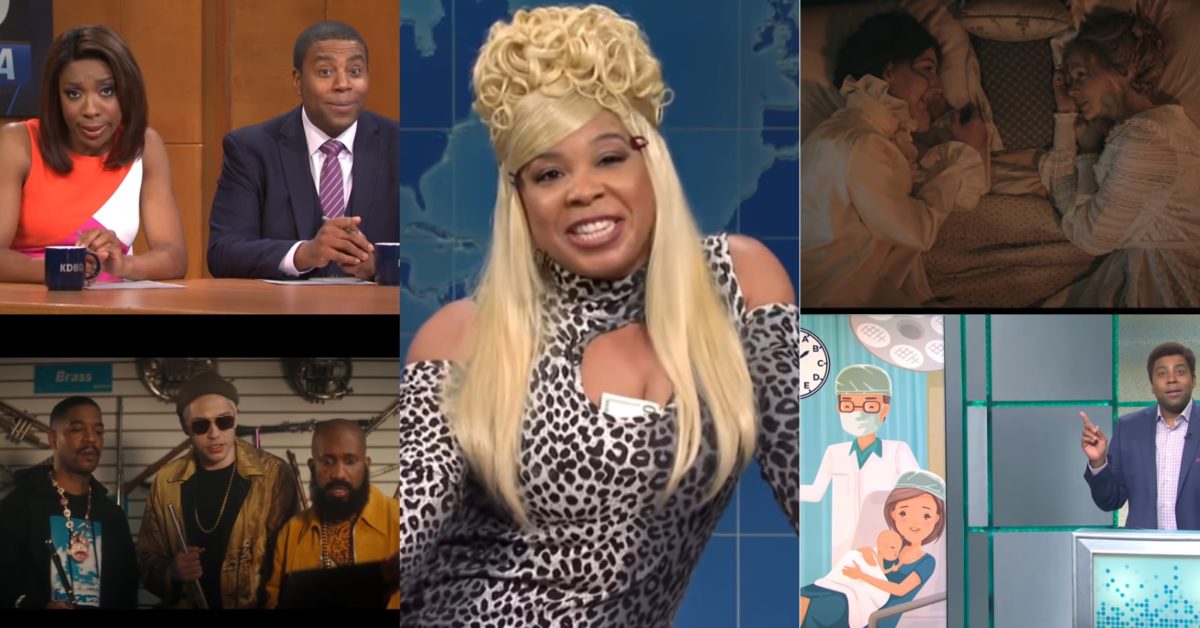 This weekend saw what should be the last edition of NBC Saturday Night Live until May 8, with host Carey mulligan (Promising young woman) and musical guest Kid cudi ordering the scenes of Studio 8H with an episode that hit from the cold to the credits (although we are still on the fence with the sketches “The Eggs” and “Study Budy”). There was a lot to like this week and nothing that really missed the mark – a good mark for a break. So let’s take a deep dive into why it was worth 90 minutes of our life …

In one of the sharpest, most efficient Saturday Night Live the cold opens, Kenan Thompson, Kate McKinnon, Alex Moffat, Chris Redd, and Ego Nwodim demonstrate both the fundamental difference in media coverage of racial issues as well as how different blacks and whites still view some long-standing issues that are divisive for no real reason. Extra points to Redd for hitting that “Florida Age 17” joke perfectly:

I never knew how badly I needed to know what was going on during those intervening moments in the IBS (irritable bowel syndrome) commercials until Saturday night. Thompson and Aidy bryant go beautifully over the top with how Mulligan’s IBS-suffering mother blew up the bathroom during her child’s recital. But special props go to Mulligan for the way she said to her husband (Mikey’s day) for “shutting the fuck up” and her deadly and serious threat to “destroy” another mom if she tells someone about the bathroom.

Okay, I’m just going to say, “What’s wrong with this picture?” must be the new one Danger! sketch. Mulligan, Bryant and Redd are just the right mix of disturbing, inept, conspiratorial, and oblivious to make this work – and again, Thompson is in the seat of accommodation control while masterfully moving from the right man to the right man. ‘joke saver (“I said CLOCK.”):

One way to win my heart if you are one SNL host or musical guest? Always be ready to participate in the joke, even if it touches a little near you. Mulligan understands her craft so well that she knows how to compose certain aspects to take things from the dramatic to the hysterical – and let’s make sure we don’t leave out Heidi Gardner, who holds more than that in this sketch and has been a multi-talent all season. Additional points for the “male director” line at the end and Kate mckinnonThe line of on current modern sexing:

I’m starting to sound like a broken record when it comes to “Weekend Update” but Colin Jost and Michel Che got out with their chainsaws and started cutting with the first joke and never gave up. Of the president Joe biden pipeline Clint eastwood To Tyler perry preparing to deliver viewers a “Young Madea” series, this edition touched the topics left and right with a well-deserved arrogance that vibrated throughout the segment (with the best venom recorded appropriately enough to Matt Gaetz). Beck bennett and Redd said out loud what everyone was thinking: President Barack obama and Bruce springsteen are great guys, but they’re not the first couple you think of when you think of “podcast”. Punkie johnson owned this screen as Pineapple stripper Penelope Peters, invited to discuss the ESPN / Paul Pierce situation. Johnson continues to approach roles with skill and energy, and it shows in a skit that could easily have failed if Johnson didn’t own the moment so well (and yes, we would party with Pineapple). But you know a segment is running at full speed anyway an interview between Jost and the Iceberg that sank the Titanic is laughing, especially when said-Iceberg-with-a-new-album-to-promote is played by Bowen Yang:

Love Star Trek but hate whiners, privileged whites? This is the sketch you want. Day and Mulligan make you want to wade through your screens and slap their characters on the back of the head for some meaning. Remark ? The end of the airlock reminded us of Adult Swim Rick and morty– nothing else to add to that. I just wanted to share:

Yes, it’s Kid Cudi, Pierre Davidson, and Redd featured in a music video on their all-time favorite instrument: the “Weird Little Flute” – and it was TimothÃ©e Chalamet make an appearance as a guest. You probably expect me to give you more detail than that, but you don’t need it. It’s really a clip of their love for that twisted little flute sound you hear in some songs – and you buy into it even if you don’t get it in the first 10-15 seconds. Davidson has to be the starting point for all video clips being shot, as there is just no shortage of it, and those segments really seem to give a number of the cast members an even bigger scene to experiment with. Mulligan posing as the music store employee who ends up showing the money and singing about the promotion she’s going to get for selling them all the flutes was a nice touch at the end, but now’s the time to Kid Cudi, Davidson and Redd in the sun.

Finally, a WWII documentary sketch finds the estranged military couple Bertie (Day) and Mary (Mulligan) exchanging wartime letters. Again, a skit that could have been filled with shattering cast members and waves of nonsense, but Day and Mulligan escalate it nicely. The combination of Mulligan’s calm, almost sociopathic ability to broach any subject (or send cocaine by mail) with Day’s growing disbelief in what the woman of his dreams is sending him made the skit a big deal. construction – whether it’s a lunch with the Nazis or a hint that they actually murdered someone.

Did you like it? Thanks for sharing on social media!