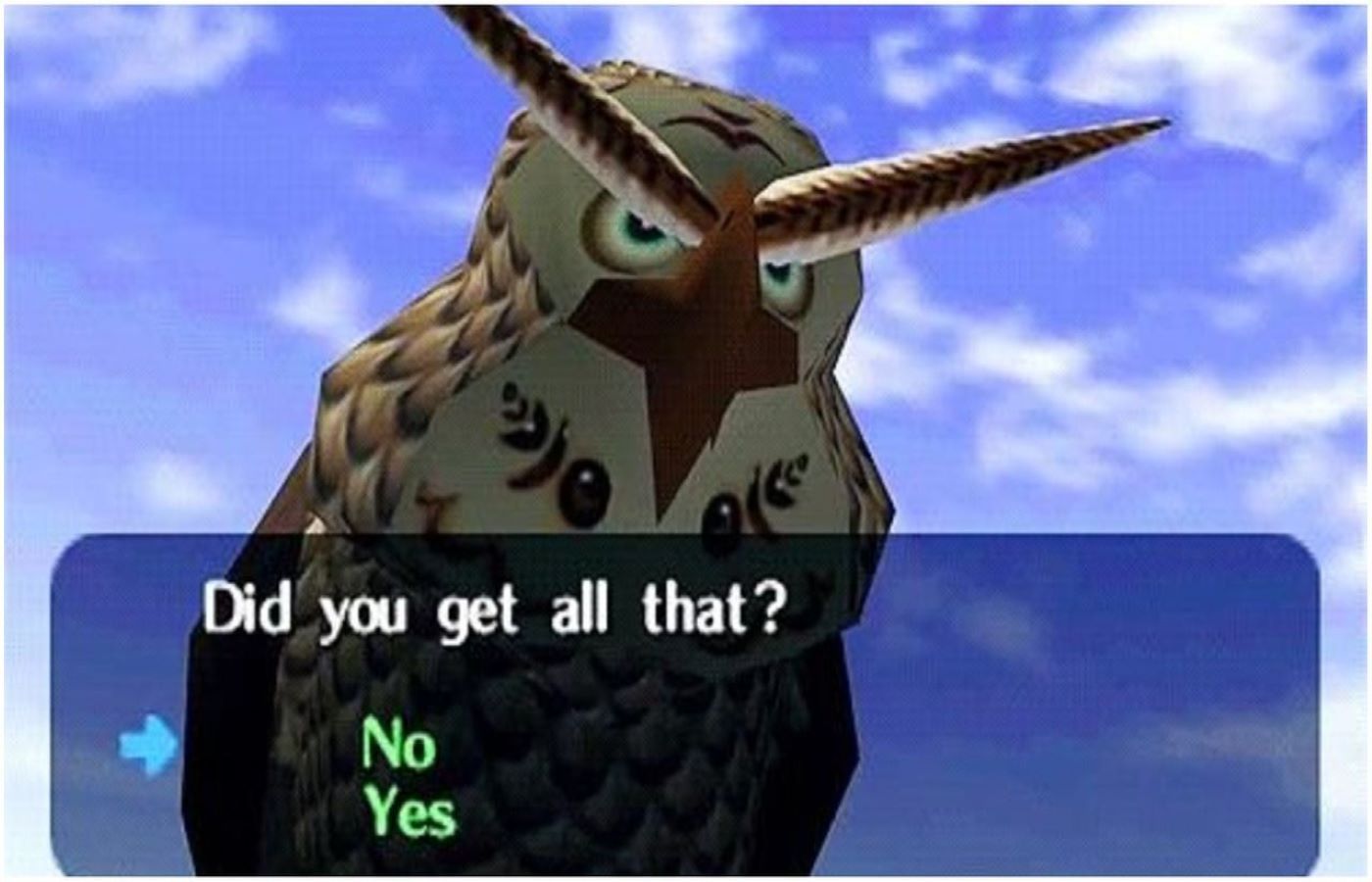 A bunch of fans create a tribute cover to Kaepora Gaebora’s theme from The Legend of Zelda: Ocarina of Time, and it sounds really good.

There are several reasons why The Legend of Zelda: Ocarina of Time is still considered one of the best video games ever made, even to this day. With one of the best tutorial levels in the game, multiple innovations in 3D environments, an epic story and an excellent soundtrack, it has become the original model for 3D adventure games.

Of course, this does not mean that everything in The Legend of Zelda: Ocarina of Time is perfect, or holds up so well today. Players are often divided on certain aspects of his controls, though they’re still impressive given that many were early examples of their kind. Other aspects, like certain characters, get less love. At least, that’s usually the case.

One character in particular that players generally want to see less of a presence in Ocarina of time is Kaepora Gaebora. Seemingly a useful NPC, Gaebora is an owl who whispers in Link’s ear about upcoming challenges, with dialogue that many players ignore. He appears multiple times throughout the game and doesn’t have much to offer except for his theme music, which is one of many fun tunes in Ocarina of timeprogramming. So much fun that a YouTube channel created a cover of it, similar in spirit to the group that covered Toto’s “Africa” ​​with Majora’s Mask implements.

The cover is made up of six layered acoustic guitars and a single violin. It sounds great and has a peaceful air, sounding like a melody that wouldn’t be out of place in another game’s tavern or when traveling between towns. This isn’t The Collab Playground’s first cover, but it’s certainly an unexpected cover. As mentioned above, most players don’t like Kaepora Gaebora very much, so the idea of ​​a musical tribute is a bit of a surprise. Even a Majora’s Mask pie makes more sense.

Maybe it’s because so many feelings towards the helpful owl are negative that The Collab Playground decided to cover the theme. After all, with the amount of time players have spent talking to Kaepora Gaebora enough for some to declare him a major video game villain, it only makes sense that his theme would stick in their heads.

So this acoustic cover joins many other fan-made works celebrating The legend of Zelda and Ocarina of time specifically. Others include everything from the previously mentioned pie to a full mural of Ocarina of time. Other works from The Collab Playground include the Hateno Village theme from breath of the wild and buy something Earthbound.

The Legend of Zelda: Ocarina of Time is available on Nintendo 64, 3DS, GameCube and Switch.

MORE: The Legend of Zelda Would Be Great As a Tabletop RPG

Cyberpunk 2077 could be a surprise launch on PS5 and Xbox Series X tomorrow, leak suggests

Shortly after CD Projekt Red announced a new Cyberpunk 2077 stream, there is some evidence to suggest that it will be dropping PS5, XSX versions there.

7 Advantages and Importance of Installment Loans