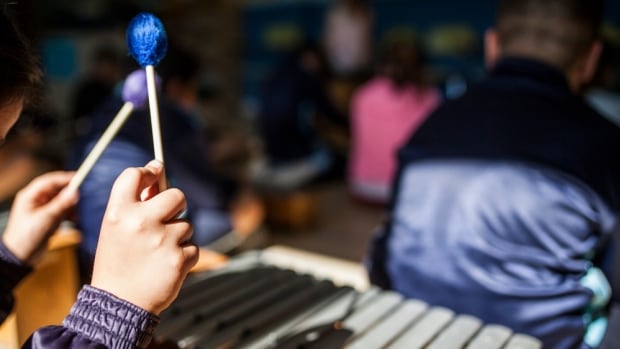 The province has announced it is easing COVID-19 restrictions to allow students to sing and play wind instruments in Manitoba schools starting Monday, but a Winnipeg epidemiologist warns it may be too early to relax the rules.

â€œI would be a lot more comfortable as the weather warms up, obviously, if the practice takes place outside,â€ said Cynthia Carr, Winnipeg-based epidemiologist and founder of EPI Research.

“But I’d also kind of ask myself, ‘Is this still achievable in a Zoom meeting, and is it worth trying to do it in person?'”

The province made a decision to restrict singing and playing of wind instruments in schools last year when COVID-19 cases began to increase in Manitoba.

At the time, a Manitoba government spokesperson said the music guidelines were based on reports that choir participation was associated with COVID-19 “super-broadcaster” events.

A Friday newsletter from Manitoba Education said it would once again allow indoor singing and playing of wind instruments for Kindergarten to Grade 12 students in music lessons and after-school activities, provided that schools adhere to a list of safety rules.

The province said masks must be worn, instruments must be cleaned regularly, there must be a limit of 25 people and there must be two meters of physical distance between participants, or barriers such than plexiglass if distance is not possible.

The province also listed a number of recommendations that schools should consider to reduce risk, such as not sharing wind instruments and brass instruments and asking students to empty their sputum valves alone or with two meters of physical distance and the use of masks.

The province also gave advice on how students should behave when practicing and said schools should make sure rooms are well ventilated, with the air exchange system functioning properly.

Carr said she believed those guidelines lacked information on how adequate ventilation would be measured.

â€œIn the document that I read, it doesn’t say what that standard is,â€ Carr said. “That doesn’t mean it doesn’t exist. I just don’t see it in these specific guidelines.”

Although she acknowledges that the number of COVID-19 cases has declined in recent weeks, she said there was a high risk when singing and using wind instruments indoors.

There is also the emergence of new, more contagious coronavirus variants. More than 20 cases have been identified in Manitoba so far.

â€œIt doesn’t take much for this worrisome variant to become a dominant strain,â€ Carr said. “And we know that the more people are together, the more these viruses will seize this opportunity to spread.”

She thinks it would have made sense to leave the restrictions in place at least until the end of this school year.

â€œJust to give us a bit of a break so that we don’t see outbreaks in the school that maybe could have been prevented,â€ Carr said.

Dorothy Dyck, a choir teacher at Maples Collegiate in Winnipeg, said she is thrilled that students can start singing at school and is committed to trying to do so in the safest way possible.

â€œIt won’t be like that yet,â€ Dyck said. “But I think it’s going to be such a relief that they’re starting to experience that little bit of normalcy.”

She plans to follow mandatory rules set by the province to help reduce the risk of transmitting COVID-19. In fact, she would have liked them to go further.

Like Carr, Dyck thinks the details of how to make sure a room is properly ventilated are vague.

She also did her own research which suggests that people should limit the time they sing together indoors to 30 minutes.

“There is no mention of a [maximum] time at all, â€Dyck said.

With the weather warming, Dyck said she would likely run the class indoors for 30 minutes and then move outside to give the room time to air out.

She said while she was happy the rules were relaxed, more detailed guidelines would help ensure consistency between schools.

â€œWe always have to be careful,â€ Dyck said.

So nail guns are officially a musical instrument now