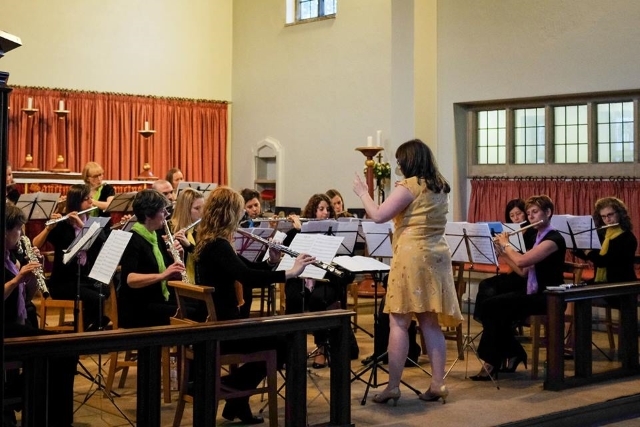 The next in our series of classic bands and troupes because no one has found a better word yet focuses on a south London musical collective with a hugely controversial name. Any London reader over the age of 30 will understand why Opal Flutes is a candy-based pun, while younger readers are likely wondering what that means and why they’re not called Starflutes instead.

In 2008 a group of flautists reunited in East Dulwich following a shared revelation that there are never enough places available in regular orchestras for flautists, and when a place arises, the lucky recipient tends to cling to it for life. Thus was born Opal Flutes, a flute choir made up of ladies and men who meet twice a month at Christ Church Methodist and United Reformed Church in East Dulwich to practice a repertoire that to describe as varied would be tantamount to to describe a hit of Smarties as ‘having a color or two’.

Having grown in membership from 10 to 27, Opal Flutes honed their talents at regular rehearsals and at two concerts a year, held at the same church in East Dulwich. Just about anything can be included in their song list, from show tunes to classical music, movie themes and anything that helps make the game fun for musicians and their audience.

Occasional themed shows help mix things up even more. One particularly memorable Halloween show called Spooks & Spells involved music from the Danse Macabre, tunes from Harry Potter, the Phantom of the Opera, and all sorts of other spooky sounds.

They also make a wonderful Pink Panther, as you can hear below.

The choir’s musical director and conductor is Sharon Moloney, present from the start and involved in amateur music in London for some time through the Making Music organisation. Having conducted a similar choir in school, before joining the National Flute Orchestra, Sharon says she takes great pleasure in organizing Opal Flutes events and onboarding new musicians.

Finding new members is as important to Opal Flutes as it is to most amateur bands. It’s a mixed-ability organization, and players of all skill levels are welcome and helped to find their best place within the group. The repertoire is changed every six months, at which time everyone’s usual standing places are changed, so that everyone can play alongside others of different abilities and styles, benefiting the whole group.

One of Opal Flutes’ upcoming shows is another one of their themed efforts – A Night at the Circus on October 25th. This will feature Entry of the Gladiators by Julius Fucik and it can only be a great laugh played and heard on the flute. There are more shows to come in a busy year, including a joint gig with fellow South London collective, the Koruso! Southwark Community Choir.

If you are interested in joining the group, you can get in touch through their contact form, and while all types of flutists are welcome, if you happen to play alto or bass flute, or piccolo, they’ll organize a red carpet for your first rehearsal and shower you with goodies throughout your time in the band, or at the very least be very grateful. They also have a junior section for budding flute heroes.

Opal Flutes makes a clear and consistent point of making choir attendance fun and pressure-free, with an emphasis on providing something for everyone involved, whether they are playing or attending a performance. And we don’t know about you, but to us, that sounds really adorable. Oh come on, you knew this was coming.

Note: If you’ve never heard of Opal Fruits, blimey – how old are you?