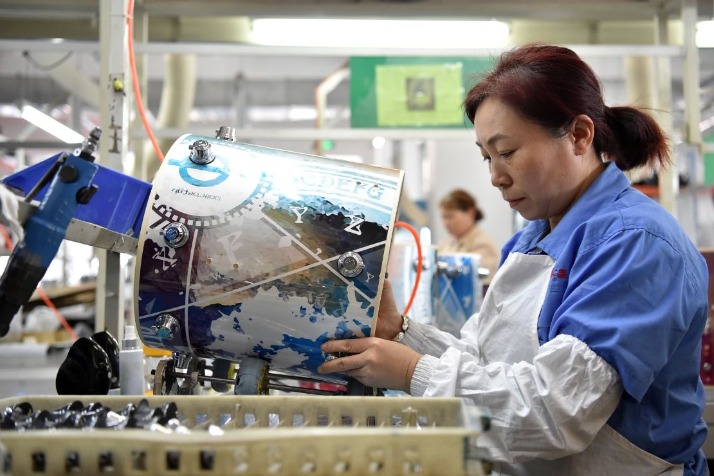 TIANJIN ï¼ On the wall of Liu Ming’s office hangs a map with small flags to show the drummaker’s sales network around the world.

As the founder of Jinbao, a musical instrument company based in Tianjin with more than 1,800 employees, Liu has sold its products to more than 90 countries and regions.

Chinese private companies have experienced tremendous growth, thanks to the country’s policy of reform and openness over the past decades. Liu’s business began in 1984 when he rented several dilapidated houses and hired a dozen workers to cast molds.

Once on his way to deliver screws to a musical instrument factory in Beijing, he saw workers studying an imported snare drum. At that time, few Chinese companies were able to manufacture snare drums.

The drums produced by Jinbao made their public debut at a musical instrument exhibition in Tianjin that same year, but they were ignored by exhibitors and visitors. Liu was torn with anxiety. He jumped on a drum and shouted, “I can’t believe nobody cares about such good drums.”

To his surprise, his dramatic demeanor drew a crowd of merchants.

However, he suffered a setback during his first overseas business selling drums. In 1997, he and his colleagues brought a drum ensemble to a musical instrument exhibition in Germany.

Not speaking any foreign language, they took a dictionary and communicated with the foreign exhibitors through body language. During the exhibition, Liu noticed a huge gap between their products and the others on display.

He wanted to sell a battery for around $ 100 to $ 200 to a foreign visitor before the show ended; however, the client rejected him and offered to help Liu throw the drum in a trash can for free.

â€œAt that time, I decided to establish a strong brand with high quality standards and drums,â€ Liu said. He began to reform his company by introducing more advanced production lines and improved management.

Today, an electronic screen in the Jinbao workshop displays real-time data of each production line. The machines are running at high speed with only a few employees overseeing the operations.

â€œWe have 12 workers and more than 60 machines in our workshop,â€ said Wu Dingjun, a worker at one of the four factories in Jinbao where they produce more than 1,000 batteries per day.

Now, Jinbao has grown into a company with assets of over 600 million yuan ($ 87.2 million). It manufactures more than 400 kinds of products, including drums and wind instruments. Sixty percent of them are sold in foreign markets.

Each year, Jinbao invests more than 10 million yuan in research and development and has obtained more than 400 patents.

â€œWith so many foreign traders willing to talk to us when we attend international exhibitions, now they need to make an appointment in advance,â€ Liu said.

Private enterprises have become a dynamic force in national economic and social development, currently providing over 60% of China’s GDP, 60% of fixed capital investment, 75% of technological innovation and 90% of new urban jobs. .

Jin Jiguang, president of the Percussion Institute affiliated with the Chinese Musicians Association, said that an increasing number of Chinese musical instrument companies have come to realize the pursuit of innovation and design of advanced designs to better meet international demands. China’s great market potential for musical instruments has also supported the development of the industry.

Last year, the market value reached 44.8 billion yuan, accounting for about a third of the world total and ranking second only to the United States, according to the Music China 2018 exhibition. There are both opportunities and challenges. â€œWe will continue to learn and improve. Innovation is always the key to improving the competitiveness of our products,â€ Liu said.

When to let your child give up a musical instrument