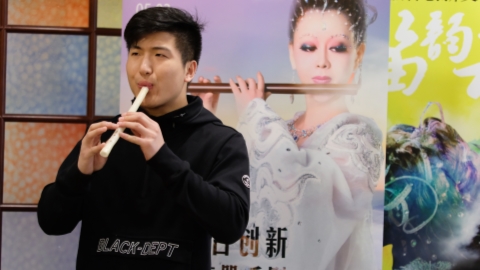 Bone flutes to play the sounds of history

The magical sound of a bone flute can be enjoyed when flutist Tang Junqiao and her colleagues perform at the Shanghai Spring Music Festival next month.

Approximately 30 flutes will be used in the show, some reproducing the sound of bone flutes found in the relics of Jiahu in Henan Province, which are believed to be up to 9,000 years old.

More than 30 flutes made from red-crowned crane bones were discovered in Jiahu village in the 1980s and 2001. They suggested that the bone flute was the oldest musical instrument in China as well as the oldest wind instrument in the world.

Zhao Songting, the famous flute player, was invited to play the bone flute when they were discovered. He made a bone flute replica and had planned to perform on stage, but died in 2001.

Tang, Zhao’s student, follows in his teacher’s footsteps. With the help of flute maker Wang Jianhong, she and her colleagues tried to reproduce a six-hole flute from Jiahu Relics Tomb No. 253 with materials including rosewood, Chinese fir, bamboo. and resin.

â€œIt took us about a year, with repeated experiments, testing and comparison with the audio data, to find the voice closest to that of the original bone flute,â€ Tang said. â€œFortunately, we passed the tests with bitter bamboo and synthetic resin-based materials. The finished flutes sound very similar to the ones in the recording, but have better intonation.

Tang and his colleagues will present the history of the Chinese transverse flute at next month’s show. Director Xu Ying said it will be a unique cross-work with the participation of a traditional Chinese orchestra, a symphony orchestra, a choir and a multimedia medium with the flute playing the role. main.