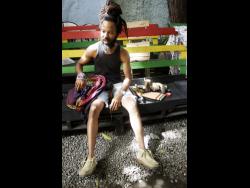 Amid car horns, reggae music from nearby speakers inside Life Yard on Fleet Street, and enthusiastic screams from children from a nearby school alluding to his dismissal, flautist and musician Andre France emits rich melodic notes from one of his own creations while waiting for the stampede of elementary school children on the way home.

“Don’t worry,” says France The Sunday Gleaner seated, patiently displaying the different types of bamboo flutes. “You will soon see them (the children) running around and playing.”

France has appealed to the communities located near Laws Street and Fleet Street, a haven for visual and recording artists in its “100 flutes for 100 young people” campaign.

Already, he has taught more than five local boys and one girl how to play the flute the correct way to hold the instrument to control breathing.

In no time at all, three young boys, each about seven or eight years old, ask for a flute.

The young boys quickly seize their favorite flute and gather in France.

The lessons of the day seem to be “sharing” and “patience”, as it is easy to become frustrated if the desired sound is not produced. France says her first experience playing the flute was certainly a challenge, but that it was well worth the patience after hearing how it sounded.

Third-grader Tyrell Jackson sits next to France, practicing the entire session until he is out of breath, but showing no signs of giving up. “He is one of the best motivations for me to continue,” France said.

The flutes he makes produce vibrant sounds that resonate in the street, like the flute player’s call, so much so that more and more children are starting to follow every move of France like the character.

â€œThis is exactly how it all started, a friend of mine brought me to Fleet Street and as usual I had a flute or two with me at the time,â€ France said. â€œWhen I started playing, the young people just got together, some even asked me to bring them a flute the next time I came back,â€ France said.

At the time, France did not know when he would return. “I know the likkle yute doesn’t even know how powerful this moment has been for me.”

You could say that France pays forward because he too learned in the same way under the guidance of a musician – M’bala M’gabo. Now he’s no stranger to live acoustic events like Dub School and Dub Club, with a large following of reggae music players like Yaadcore and Zincfence Sound.

As for making flutes, it was trial and error for France, using bamboo from its home environment in Stony Hill, St Andrew. He explains that bamboo is difficult to work with. It is one of the oldest instruments, and for some reason the musician has grown to love it and wants to share his passion for the flute with the next generation of musicians.

As part of the initiative, France has produced flutes for beginners (without a particular key) but says that once the young participants understand how to play and the attitude to become a good flautist, he will then consider distributing concert flutes (which are in the G and C key range) before expanding to larger communities.

“Concert flutes can climb a major or minor ladder and play alongside an orchestra. This is just the start, and with the right support and funding, the project can take to the streets further,” he said. he declared.

He has donated around 15 handmade native bamboo flutes to date, but the goal is 100.

Bone flutes to play the sounds of history